Acknowledgment and disclaimer: The views and positions expressed in this report are solely those of the author and do not necessarily reflect the views of the Department of Foreign Affairs, Trade and Development or the Government of Canada. The report is in its original language.

The COVID-19 pandemic has posed unprecedented challenges and pushed governments and media into uncharted territory. Never has a health crisis assumed such proportions, gripping every country around the world and crippling the global economy.

As the COVID-19 virus spread, journalists and media outlets rose to the challenge while dealing with the limitations that the virus posed on their work. While disseminating information about the health crisis, media also highlighted the shortcomings in the response by governments and spoke truth to power.

However, many governments responded to the crisis by imposing harsh measures to control the public narrative about the pandemic and cover up their inadequacies. They clamped down on the media to control information and public debate about the pandemic. Emergency regulations were put in place, while new and existing laws relating to disinformation and fake news were used to stifle independent media. In several countries, journalists from independent media were denied access to press briefings and regulations were imposed to compel media organizations to report data provided by the government.

According to data gathered by the International Press Institute (IPI), at least 426 media freedom violations related to COVID-19 took place around the world between February 5, 2020 and August 13, 2020.Footnote 1 In 192 instances, journalists were arrested or charges were filed against them; in 134 instances, authorities cited the pandemic in refusing to comply with their access to information obligations; and 17 countries passed sweeping “anti-fake news” laws under the pretext of fighting disinformation related to the pandemic, among other categories. IPI also recorded 104 incidents of verbal, physical and online attacks on journalists. These data indicate a concerted effort by governments to limit independent information at a time of great need.

To overcome the crisis, governments should immediately withdraw all measures limiting independent media coverage and equal access to information and stop misusing the crisis to restrict press freedom and freedom of expression.

The outbreak of the COVID-19 pandemic has created a public-health challenge not seen in decades. At times of crises like the current one, the free flow of independent news is more crucial than ever, both to inform the public on vital measures to contain the virus, as well as to maintain an open dialogue and debate on the adequacy and appropriateness of those measures. Such dialogue is essential for gaining the necessary public trust in efforts being made by governments to fight the pandemic.

Unfortunately, the spread of the virus prompted numerous governments in both democracies and authoritarian regimes to clamp down on the media to control the information and public narrative about the pandemic, sparking concerns about press freedom.Footnote 2 This clampdown included a host of draconian new laws, many passed as emergency regulations, that restrict access to information or criminalize the publication of content that contradicts official messaging. Independent journalists across the globe faced arrest, criminal prosecution and, in some cases, violence for their efforts to cover the virus and its impact. IPI has been systematically monitoring press freedom violations related to the pandemic.Footnote 3

In addition, to prevent the spread of the virus, many governments adopted expansive new surveillance measures to track and trace COVID-19 infections, including mobile phone applications and biometric and facial recognition software. Expansive surveillance poses a threat to journalists’ privacy as well as to their right and duty to protect their sources.

“Some States have used the outbreak of the new coronavirus as a pretext to restrict information and stifle criticism,” said UN High Commissioner for Human Rights Michele Bachelet. “A free media is always essential, but we have never depended on it more than we do during this pandemic, when so many people are isolated and fearing for their health and livelihoods. Credible, accurate reporting is a lifeline for all of us.”Footnote 4

Calls by the United Nations Secretary GeneralFootnote 5 and Special Rapporteurs of the UN, the Inter-America Commission on Human Rights and the Organization for Security and Co-operation in Europe to uphold press freedom and protect journalists went unheeded, as governments pressed ahead with efforts by the media to provide accurate and factual information about the health crisis.Footnote 6

Impact of COVID-19 on media freedom

At the start of 2020, governments around the world scrambled to respond to the rapid spread of the COVID-19 virus. On the one hand, efforts were made to prepare medical facilities and equipment, and introduce lockdown restrictions. On the other hand, authorities increasingly sought to control the public discourse as deaths mounted and media reports criticizing the shortcomings in the response increased.

China, where the virus emerged, became the first nation to impose restrictions on coverage of the contagion. After first aggressively attempting to silence doctors who issued initial warnings, the government moved quickly to control the flow of information about the spread of the virus, targeting the few independent reporters who dared to expose the extent of the infection. Several citizen journalists who documented the situation in the country went missing and are feared detained by the government.Footnote 7 Meanwhile, critical social media posts were suppressedFootnote 8 and access to foreign news reports through VPNs were increasingly blocked.Footnote 9

Restrictions on media reporting soon spread globally.Footnote 10 In many countries, measures reflected deliberate efforts to use the virus as a pretext to expand government information control, while in others, authorities may have acted out of genuine public health motives but with clear disregard for the role the free press plays in protecting public health.

Journalists and media organizations bore the brunt of these restrictions. They were not only subjected to new regulations and laws but faced restrictions on access to information and access to public data, health care workers, officials and press conferences. They also suffered physical attacks, arrests and intimidation, as governments tried to control the public narrative and debate on the health crisis. In a joint statement, UN Special Rapporteurs condemned the excessive use of force on the pretext of COVID-19 security measures.Footnote 11

Moreover, the pandemic has caused severe financial hardship for independent media organizations. Amidst falling revenue from circulation and advertising, many media outlets have laid off staff, while several others have moved from print to online publications.

According to data collected by the International Press Institute, which has been widely cited, including by the UN High Commissioner for Human Rights, as of August 13, 2020, 426 press freedom infractions had been reported from around the world.Footnote 12 The instances of attacks and restrictions collected by IPI in the months following the start of the pandemic indicate a concerted effort by numerous governments to limit independent information. Despite IPI’s intense efforts, other attacks and restrictions may have gone unreported.

While governments stated that they considered media as an essential service, data shows that excessive measures were adopted to prevent journalists and media organizations from doing their work. Restrictions on access to information were imposed, journalists were prevented from travelling for newsgathering purposes, and several were arrested or charged for reports critical of the government. New laws were enacted, and existing ones amended to criminalize disinformation and fake news, which effectively curtailed media freedom.

Some 17 countries have enacted excessive fake news laws or amended existing laws to combat disinformation. Algeria, for example, amended its penal code to criminalize “fake news,” while in the Philippines, President Duterte signed a bill giving himself special powers that include imposing prison sentences and fine for spreading “fake news.” In Turkmenistan, the government simply banned the use of the word “coronavirus.”Footnote 13

Europe, where countries typically champion free speech and human rights, registered an alarming number of press freedom violations. IPI’s briefing paper “Media freedom violations in the EU under COVID-19,” lists EU member states and candidate countries Hungary, Bulgaria, Romania, Italy, Slovenia, Spain, Croatia, Germany, Turkey, Serbia, Albania and Bosnia and Herzegovina as countries where regressive regulations and restrictions on information have impeded media freedom.Footnote 14 Turkey, which has 77 journalists in prison, has refused to heed calls by human rights organizations to release them owing to the threat of infections in prison.

Journalists in Russia reporting on the authorities’ handling of the COVID-19 pandemic face continued fines and investigations stemming from new laws on “fake news.”Footnote 15 During the coronavirus pandemic, the country’s media regulator has issued dozens of take-down and correction orders and threatened to block news websites over coverage.

Egypt, which has more than 60 journalists detained across the country, in prison, released several hundred prisoners after COVID-19 infections increased in prisons but has consistently refused to release journalists. Mohamed Mounir, a noted journalist, died of COVID-19 that he contracted in the prison.Footnote 16

Surveillance tools developed as means to track the pandemic often did not include sufficient guarantees for confidentiality for journalists, effectively challenging their ability to protect their sources. Concerns were also raised about the lack of sunset clauses for the use of such surveillance tools, which threaten to outlive the current health emergency. In an important precedent-setting case, the National Union of Journalists in Israel went to court against the tracking of mobile phones of journalists, and the court ruled in their favour.Footnote 17

The UN Special Rapporteur on the promotion and protection of the right to freedom of opinion and expression called for robust and transparent public oversight of surveillance companies seeking entrance into the COVID-19 surveillance field.Footnote 18

First and foremost, it is clear that the COVID-19 coronavirus poses a major global public-health challenge, with governments taking unprecedented steps, which also included massive restrictions on fundamental rights, to stop the spread of the virus. However, in these challenging times the free flow of independent news is more valuable than ever, both in informing the public on vital measures to contain the virus as well as in maintaining an open dialogue and debate on the adequacy and appropriateness of those measures. This dialogue is essential for winning the necessary public trust and cooperation to implement public health measures. 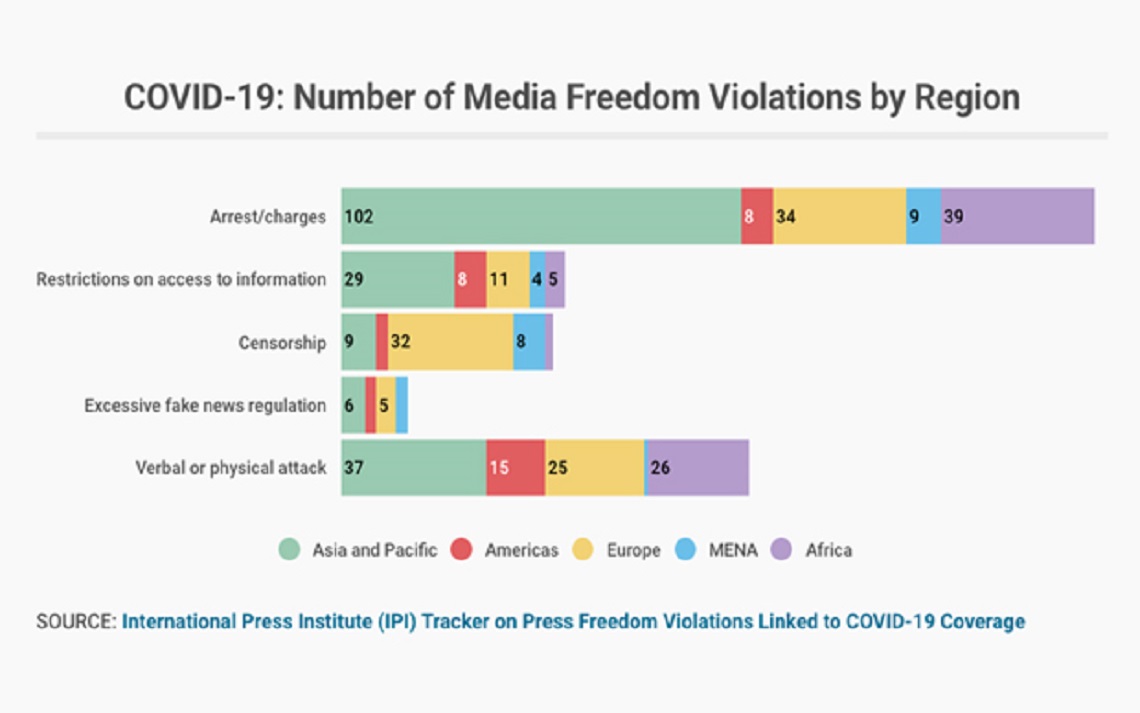 UN Office of the High Commissioner for Human Rights (OHCHR), “Bachelet alarmed by media clampdowns, says public has a right to know about COVID-19”, April 24, 2020. https://www.ohchr.org/EN/NewsEvents/Pages/DisplayNews.aspx?NewsID=25823&LangID=E.

OHCHR, “COVID-19: Governments must promote and protect access to and free flow of information during pandemic – International experts,” March 19, 2020.https://www.ohchr.org/EN/NewsEvents/Pages/DisplayNews.aspx?NewsID=25729&LangID=E.

UN Human Rights Council, “Report of the Special Rapporteur on the promotion and protection of the right to freedom of opinion and expression.” April 23, 2020. https://freedex.org/wp-content/blogs.dir/2015/files/2020/04/A_HRC_44_49_AdvanceEditedVersion.pdf.