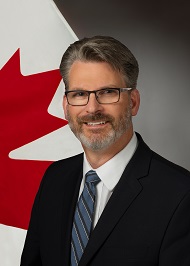 In my role, I lead a team of highly skilled and dedicated colleagues at the High Commission in Canberra and the Consulate General in Sydney to represent Canada and provide assistance to Canadians abroad. Our areas of work include consular services, trade and business development, political and economic relations, defence, migration, development assistance and public affairs.

You will find information about each of these areas on our website. Please do not hesitate to reach out to us via phone or email if you have further questions. You can find our contact information on the “Our Office” webpage.

Canada and Australia’s relations go back 125 years. In 1895, Canada’s first trade commissioner arrived in Australia and opened an office in Sydney. In 2019, we celebrated 80 years of full diplomatic ties between our countries, marking the appointments of the first High Commissioners.

Today, our relationship is broad and deep, based on our shared values and history and our common interests.  We engage very closely on a wide range of issues as we share many of the same priorities, including the promotion of the rule of law, human rights, security, free and fair trade, and indigenous reconciliation. Our relationship is also built on the foundation of strong people-to-people ties. Thousands of Canadians travel to Australia every year while many others call it home, some as dual citizens. Similarly, thousands of Australians spend time each year in Canada working, studying and travelling.

I look forward to continuing to build this relationship during my tenure as High Commissioner, and am honoured to play a role in Australia and Canada’s history.

Equally, I look forward to building Canada’s relationship with the seven Pacific Island countries to which the High Commission is accredited. Through the Canada Fund for Local Initiatives, we engage in the region to address foreign policy and development priorities, including climate change and gender equality. We believe in funding high-impact, local projects with measureable results. As an active member of many multilateral organisations, including the UN and APEC, we are committed to making the world and this region a fairer, safer, and more prosperous place for future generations.

Finally, if you are a Canadian resident or citizen in Australia, I encourage you to take a moment to register at the Registration of Canadians Abroad (ROCA) page. This will allow us to reach you in case of a natural disaster or emergency situation.

Thank you for visiting our website, and I hope you enjoy your time in Australia and the Pacific Islands if you are travelling in the region!

Mr. Glauser is married to Diane Glauser and they have two adult children.