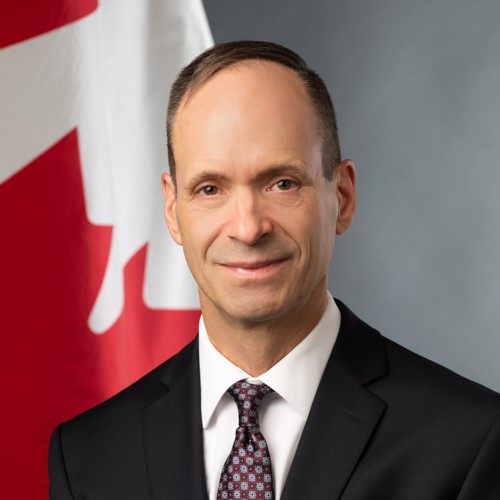 I’m very happy to welcome you to the website of the Embassy of Canada in Brussels. Our Embassy covers the full spectrum of our relations - political, economic, commercial, consular and cultural - between Canada on the one hand and Belgium and Luxembourg on the other. I hope that this website will allow you to appreciate the richness and scope of those relations.

Since arriving in Brussels, I have had the opportunity to visit many sites in Belgium and Luxembourg. Everywhere, I have been impressed by the warm welcome reserved to Canadians, by our shared history that is always present, by the solidity of our links and by the many events that continue to enrich those links.

Several examples of these types of events that I have been able to attend, come to mind: commemoration ceremonies to the memory of Canadian soldiers who were killed here during the First and Second World War; cultural events with Canadian artists; companies that announce new investments or new projects; our governments that often work together within multilateral organisations to find solutions to the many crises that affect our world.

Many Canadians live in Belgium or Luxembourg and I am also very pleased about the large number of Canadian visitors, students and professionals who come here and who enrich the links that unite us.

The visits to Canada by Luxembourg Prime Minister Xavier Bettel in April 2017 and by Belgian Prime Minister Charles Michel in June of the same year have strengthened our political dialogue at the highest level. The visit of the King and Queen of the Belgians in March 2018, leading an impressive delegation including business people and academics, has confirmed our mutual interest in seeing our already rich and beneficial bilateral relations continue to grow and prosper.

Canadians, Belgians, and Luxembourgers share the same fundamental values as our societies face the same difficult challenges: as we hear in many places calls for isolationism and protectionism, it is more important than ever to promote and fight for openness and dialogue, tolerance, respect, but also for solidarity and cohesion.

I hope that you find in these pages the information that you are interested in as well as the responses to the questions you may have. Do not hesitate to follow us via the Embassy Twitter account @CanEmbBeLux; send us your comments about the website by e-mail bru@international.gc.ca

I wish you a productive visit.

At Headquarters, he held several director positions, including in the Africa Commercial Relations Division (2008 to 2010), Northeast Asia Division (2010 to 2014), Systems and Analysis Division for the Trade Commissioner Service (2014 to 2016) and assignments (2016 to 2017). Most recently, Mr. Gendron was the director of the Europe Bilateral and Advocacy Division.

Mr. Gendron is married to Mrs. Sylvie Derome and are parents of two adult daughters.