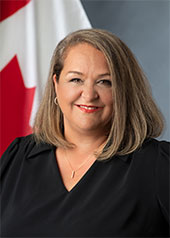 Marianick Tremblay (BAA [Civil and International Law], University of Sherbrooke, 1989; LLB, University of Sherbrooke, 1990) was called to the Quebec Bar in 1990 and joined External Affairs and International Trade Canada in 1993. At Headquarters, she has been legal counsel in the Environmental Law Division, coordinator of the Human Security Program and legal counsel on small arms. She has also held the positions of deputy director of the Brazil and Southern Cone Section and director of hemispheric affairs, which included relations with the Organization of American States and the Summit of the Americas. In 2018 she became director general for Canadian engagement in Partnerships for Development Innovation. She has had several postings overseas, including Mexico (1995 to 1998), Morocco (2001 to 2005) and Chile (2007 to 2010). She was ambassador to El Salvador (2010 to 2012) and to Ecuador (2015 to 2018).