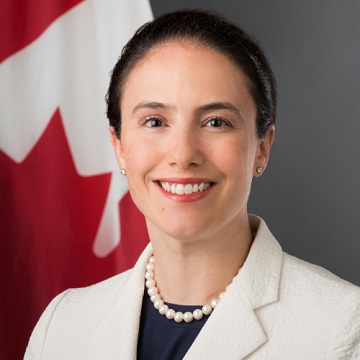 Isabelle Poupart joined the Quebec Bar in 1993 and worked as a lawyer prior to joining the Department of Foreign Affairs and International Trade in 1995. At Headquarters, she worked in the Legal Bureau and in the International Economic Relations and Summits and the Defence and Security Relations divisions. Her first assignment abroad was at the Permanent Mission of Canada to the United Nations in New York. She also worked for the Conflict Prevention Centre of the Organization for Security and Co-operation in Europe (OSCE) in Vienna. She served twice at the Joint Delegation of Canada to NATO in Brussels—the second time as head of the Political Section. Upon her return to Ottawa, she worked as senior adviser to the Assistant Deputy Minister for Global Issues, Strategic Policy and Europe. She was Ambassador and Permanent Representative of Canada to the OSCE (2013-2016), then Ambassador to Hungary, Slovenia and Bosnia and Herzegovina (2016-2019). Since August 2019, she serves as Minister and Deputy Head of Mission of Canada to Germany.