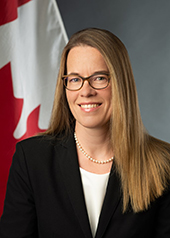 Welcome to the website of the Embassy of Canada in Reykjavik, Iceland.

It is a great pleasure and honour for me to be appointed as Ambassador for Canada to Iceland.

Canada and Iceland have deep and longstanding ties. We are allies and likeminded partners in defense and security, trade and the promotion of our universal values internationally.

This relationship has grown through our cooperation in various fora, including the Arctic Council, NATO and the United Nations. Implementation of the Free Trade Agreement between Canada and the nations of the European Free Trade Association – including Iceland – offers a strategic advantage to trade in all our countries. Cultural and youth exchanges and strengthening ties in all facets of the arts celebrate our shared heritage and build even stronger ties for the future.

In the months and years ahead, I look forward to focusing on the following priorities:

People and partnerships are at the heart of the Canada-Iceland relationship, and our embassy team stands ready to assist you in expanding our trade, investment, innovation and knowledge.

It is important for Canadians to know their responsibilities before they depart Canada. Please refer to travel.gc.ca/travelling to keep abreast of Canada’s Travel Advisories and Travel Reports.

If you are a Canadian resident in or visiting Iceland, please take a moment to register online: Registration of Canadians Abroad (ROCA).

Jeannette Menzies (BA Hons [Canadian Studies], University of Manitoba, 1995; MA [Canadian Heritage and Development Studies], Trent University, 1998) joined the Department of Foreign Affairs and International Trade in 2001. At Headquarters, from 2006 to 2013, she served in various roles, including senior adviser to the assistant deputy minister of Consular Affairs and Emergency Management, deputy director of Circumpolar Affairs and deputy director of Humanitarian Affairs and Disaster Response. Abroad, from 2003 to 2006, she served as political officer in Ankara, where she was responsible for bilateral relations with Georgia, Azerbaijan and Turkmenistan. From 2013 to 2015, she served as head of the Canadian International Centre for the Arctic Region in Oslo during Canada’s chairmanship of the Arctic Council. From 2015 to 2019, she was a director at Polar Knowledge Canada, where she established domestic and international partnerships at the Canadian High Arctic Research Station Campus in Nunavut. Prior to taking up her position in Iceland, she was senior adviser in the Nordic and Polar Relations Division.