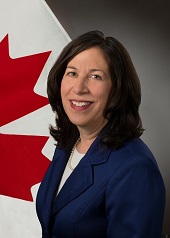 Ms. Helfand holds a LL.B. from Osgoode Hall Law School, 1985. She joined the Department of External Affairs in 1989. At Headquarters, Ms. Helfand served as a desk officer with both the Economic and Trade Policy Division and the Middle East Relations Division. She also worked as a legal officer with the Economic Law Division; as an adviser with the Kosovo Task Force; as deputy director with the Southern Europe Division; and as deputy director, then director, with the Defence and Security Relations Division. Overseas, she served as second secretary (immigration) in London, first secretary and consul in Belgrade, deputy head of mission in Tel Aviv, and again in London as a political counsellor. She also served as the Canadian Ambassador to Hungary, Slovenia and Bosnia and Herzegovina. Most recently, Ms. Helfand was director general of the Consular Operations Bureau.