Louis Marcotte, Ambassador of Canada to Peru and Bolivia 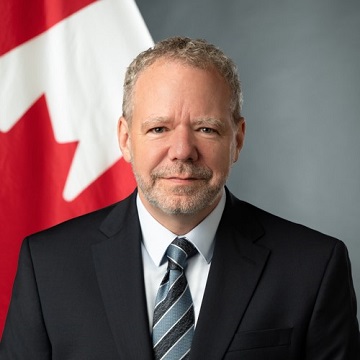 I am honoured to be representing Canada in Peru and Bolivia, where my mission is to strengthen ties and promote collaboration toward shared objectives. Canada is committed to expand and deepen its engagement in the region, promoting governance, pluralism, diversity, respect for the environment, indigenous peoples and human rights, with a special emphasis on empowering women and girls.

In Peru and Bolivia, the Embassy of Canada is actively engaged in strengthening relations by pursuing a range of common interests, including consular services to Canadians, trade and investment, development cooperation, and visa and immigration services to Peruvian and Bolivian citizens.

Mr. Marcotte (MA [Political Science], Paris II University, 1990; MSc [International Management], Laval University, 1994) joined the public service in 1994 through a management development program. In 2001, he was appointed director of marketing in the Trade Commissioner Service of the Department of Foreign Affairs and International Trade before going on assignment to Caracas as senior trade commissioner. Upon his return, he served as director of commercial relations with Europe for 2 years and then was promoted to director general of the Locally Engaged Staff Bureau. He served as executive director to the chief trade commissioner from 2011 to 2013 and then as director general, investment and innovation. In 2017, he was appointed as Canada’s chief air negotiator and, in 2020, director general and dean of the Canadian Foreign Service Institute.