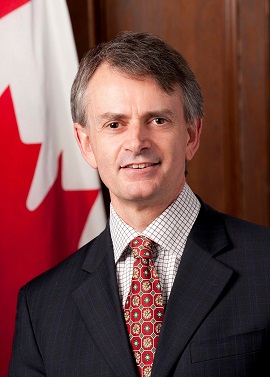 Chris Cooter, b. New Westminster, B.C. (BA Honours [Political Science], University of Toronto, 1981; MA [Political Science], Columbia University, 1982; BCL, LLB [Common/Civil Law], McGill University, 1986) was called to the British Columbia bar in 1986, and practiced law at Campney & Murphy, before joining the federal government in 1989 as acting manager of lands for the British Columbia region of the Department of Indian and Northern Affairs. In 1990, he joined External Affairs, serving in Ottawa as an officer in the legal, Europe, and policy planning bureaux, then as director of the Southeast Europe division, director of the policy planning division, director-general for executive management and assignments, and director-general for the amalgamation of the Canadian International Development Agency with Foreign Affairs and International Trade Canada. In the Privy Council Office, he worked as a policy advisor in the Inter-Governmental Affairs Bureau. In the 1990s, he served abroad as political officer at Canada’s missions in Kenya (1991-94) and India (1997-2000), and as chargé d’affaires in Cambodia (1998), and, later, as deputy permanent representative to NATO (2006-10), high commissioner to Nigeria and permanent observer to ECOWAS (2010-13), ambassador to Turkey, Georgia, Azerbaijan and Turkmenistan (2016-19), chargé d’affaires at Canada’s mission to the European Union (2019-20), and high commissioner to South Africa, with accreditation to Namibia, Lesotho, Mauritius, and Madagascar (2020 - present). He is married to Karen Blumenschein and has two daughters, Zoe and Anais.