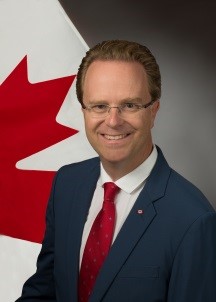 Jean-Philippe Linteau (BSc [Agriculture], McGill University, 1994; MSc [Geography], University of Toronto, 1996) joined the Department of Foreign Affairs and International Trade in 1997. At headquarters, he was director of the Clean Technology, Infrastructure and Life Sciences Division from 2016 to 2019. Abroad, he served as trade commissioner in Seoul from 1998 to 2001 and in Kuala Lumpur from 2001 to 2004, in Colombo from 2005 to 2007 as political officer, in Washington from 2007 to 2011 as international business development program manager and in New York City from 2011 to 2016 as investment counsellor and then senior trade commissioner.