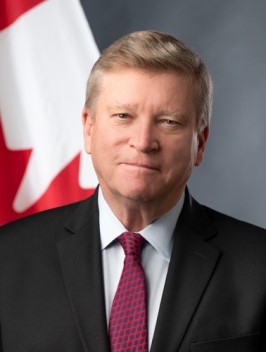 I am honoured and privileged to serve as Canada’s Consul General in New York where together with the entire Consulate General team we work to further deepen and expand the Canada-U.S. relationship. Canada and the U.S. are not only neighbours, but each other’s allies and closest of friends. Our relationship is underpinned by our shared values, and advanced by the close collaboration of our governments, our business, civil society and academic communities, and most importantly, by our citizens.

On our website you will find more information on our highly integrated partnerships across a variety of areas, as well as links to the various services offered by the Consulate General, including consular assistance to Canadian citizens and information about immigration and visa requirements to travel to Canada. I invite you to explore our site and to visit it for updates and information. I also encourage you to follow us and engage with us on Twitter, Facebook and LinkedIn where you will be able to learn about the many activities and events we organise throughout the year.

I am delighted to be here and am looking forward to proudly representing Canada.

Phyllis Yaffe was announced as Canada's Consul General in New York in July 2016. She has had a distinguished career in both the private and not-for-profit sectors. Ms. Yaffe has served as chair of the board of Cineplex Entertainment, lead director of Torstar Corporation and as a member of the boards of Lionsgate Entertainment and Blue Ant Media. A former board member of Astral Media, for many years she served as a senior officer, and ultimately as chief executive officer, of Alliance Atlantis Communications Inc. At Alliance Atlantis, Ms. Yaffe oversaw worldwide operations, including Canadian specialty-television channels, international television distribution business and the popular CSI television franchise.

Ms. Yaffe is a recipient of the Order of Canada, as well as the Lifetime Achievement Award from Women in Film and Television. She was also inducted into the Canadian Association of Broadcasters’ Hall of Fame, and has served as Chair of the Board of Governors of Ryerson University, Chair of Women Against Multiple Sclerosis, Chair of the Ontario Science Centre and served on the board of the World Wildlife Fund.