Robin Wettlaufer, Representative of Canada to the Palestinian Authority 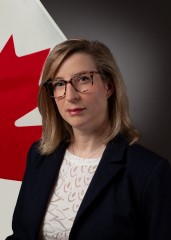 Robin Wettlaufer (BA [International Relations], University of British Columbia, 1998; MA [Political Science], York University, 2000) joined the Department of Foreign Affairs and International Trade in 1998. At Headquarters, she held positions as desk officer for Iraq and as conflict prevention adviser for the G8 foreign ministers’ process, and she also served in Regional Security and Peacekeeping and in the Japan Division. She was senior adviser to the Darfur peace process from 2010 to 2011 and deputy director for the Sudan/South Sudan Task Force from 2011 to 2013. Overseas, she served in Ramallah from 2005 to 2008; in Islamabad from 2008 to 2010; and in Istanbul, as both Canada’s special representative and head of political affairs for Syria from 2014-2019.