Views expressed herein are those of the Office of the Extractive Sector CSR Counsellor.
Errors and omissions remain the responsibility of the Office.

June 2013
This report is available in English, French and Spanish.

About the Office of the Extractive Sector CSR Counsellor

The Office of the Extractive Sector CSR Counsellor is a new office, set up as part of the Government of Canada’s corporate social responsibility strategy for the Canadian international mining, oil and gas sectors. The Office’s Review Process provides an opportunity for dialogue and problem-solving between a Canadian extractive company overseas and people affected by the project.

In response to a request for review received on February 11, 2013, the Office of the Extractive Sector CSR Counsellor is in the process of completing its dispute analysis. One component of that analysis is the Office’s field visit, which took place in June 2013. This report provides a short update of the request so far, and highlights themes which emerged during the visit.

One of the Office’s key guiding principles is Transparency. Implementation of this principle recognizes the distinction stakeholders have made between transparency of process, which is to be encouraged and is deemed critical for the Office, and transparency of information, some of which may well need to be kept confidential in order to have the work proceed.

In March 2009, the Government of Canada announced a new Corporate Social Responsibility (CSR) Strategy for the Canadian international extractive sector (called “Building the Canadian Advantage”). The CSR Strategy seeks to improve the competitive advantage and reputation of Canada’s extractive sector companies operating overseas by enhancing their ability to manage social and environmental risks. One of its goals is to help ensure that extractive operations minimize negative impacts while enhancing benefits to local communities.

The CSR Strategy is based on four integrated and complementary elements:

The Counsellor has two roles – an advisory role, and a dispute resolution role. In fulfilling our dispute resolution role, the Office of the CSR Counsellor provides a new option for constructive resolution of disputes between Canadian mining, oil and gas companies and project-affected stakeholders outside of Canada. The first Counsellor, Marketa Evans, was appointed in October 2009. The Office was opened in Toronto in March 2010. To support the construction of this new Office, the Counsellor adopted a cross-sector, open and dialogue-based approach with the wide range of stakeholders interested in the issues of CSR and Canada’s mining, oil and gas industries. The construction of the Office’s Review Process was informed by a formal and proactive multiperspective consultation in which over 300 individuals and organizations directly participated, both in Canada and overseas.

Our dispute resolution process only applies to the standards noted above.

About the review process

The Review Process is a voluntary dispute resolution mechanism – the objective is to foster dialogue and to create constructive paths forward for all parties. It is about people with different views and interests working together to find mutually acceptable solutions. Supporting documents about the process are available on our website.

The Office of the Extractive Sector CSR Counsellor is a neutral third party in disputes between Canadian mining, oil and gas companies and project affected communities. This means that we help people find solutions, but we do not take sides. In many cases, a neutral third party can help people work together better. The Office uses a well-established methodology called interest-based dispute resolution and is part of a global community of practice.

The steps in the Review Process are:

Optional: The parties may also agree to work with a formal mediator.

On an on-going basis, the Counsellor writes reports about requests for review, including final reports at the end of the process.

2. This request for review

The Office received a request for review on February 11, 2013. The requesters are listed as The Mexico Canada Responsible Mining Network and inhabitants of the town of Cerro de San Pedro. According to its reports, the Network is a collaborative effort of Canadian and Mexican specialists in CSR and sustainable development, and its objectives include ‘improvement in the health and welfare of people and the environment in Mexican regions’ where Canadian mining takes place and ‘improvement in the effectiveness and efficiency of Canadian mining operations in Mexico.’

The responding party is New Gold Inc., related to the Minera San Xavier project in Mexico. New Gold has seriously and constructively engaged with the Office on this request, at senior management levels.

The Office’s dispute analysis methodology follows standard best practice for third party dispute resolution, modeled for example, by the World Bank Group’s Compliance Advisor Ombudsman, the US Institute for Environmental Conflict Resolution, and many others. We first undertake significant desk research and analysis, seeking to answer questions such as ‘who are the parties?’, ‘what are the issues?’, ‘what has been tried before to address the issues?’ This includes meetings, phone calls with all the parties and additional information sharing where appropriate.  The Office engages only with good faith actors.

Early in the process we clarified in writing with the requesters that certain issues would be excluded from the request as they were outside the mandate of the Office. These include:

The Office works to ensure that our approach is fair and balanced. The Office meets in person, by telephone and other means, with the parties in equal measure to the extent possible. These interactions allow the Office to educate parties about the process, and allow parties to share information, perspectives, and concerns.

How the field visit was conducted

The Office took steps to ensure its independence from the parties, and followed good practice guidelines. Expenses for travel and accommodation were borne by the Office. Independent interpreters were hired by the Office. Numerous different formats, forums and venues were used for meetings with many different parties. Meetings were conducted separately with requesters and the responding party, in locations of their choosing. Discussions were not for attribution. People were asked not to video/audio record during meetings. 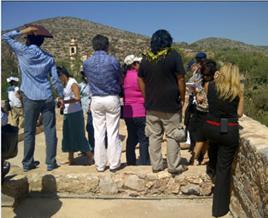 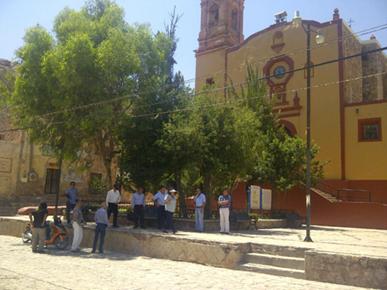 The field visit was an effort to enhance the Office’s understanding of a variety of perspectives, deepen relationships, build trust and expand the dialogue between the Office and the parties to the request. It allowed people to ask questions directly of the Office about the review process. Such a visit does not in any way constitute an audit or a compliance review.

During the course of our visit, we met with New Gold management and staff, mine personnel, community members in Cerro de San Pedro, members of other communities in the proximity of the mine, and other stakeholders. We spent time explaining the Office’s mandate and parameters, and the purpose of our field visit.

Background on the project

New Gold Inc. is incorporated in British Columbia and maintains a 100% interest in the Cerro San Pedro gold‐silver mine in Mexico through its subsidiary Minera San Xavier S.A. de C.V. 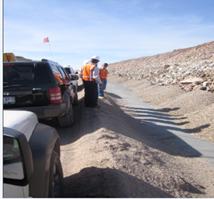 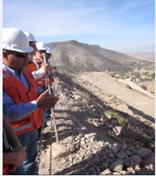 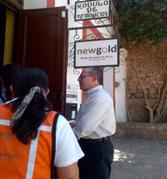 Construction of the Cerro San Pedro Mine began in 2004 and commercial production commenced on May 1, 2007. New Gold acquired the project in 2008 as a result of its business combination with Metallica Resources.

According to the company’s 2012 Sustainability Report, New Gold is a signatory to the UN Global Compact and is ‘in observation of’ the Voluntary Principles on Security and Human Rights. According to that report, New Gold has been accepted by the International Cyanide Management Institute as a signatory to the International Cyanide Management Code. As a member of the World Gold Council, the company will be required to implement the Conflict-Free Gold Standard.  According to information we were provided by the company, Minera San Xavier obtained recertification of the Environmental Management System ISO 14001:2004 for the period 2011-2014. The process plant is certified under ISO 9001:2008 for the period 2012-2015.

Although the Office met with a broad cross section of stakeholders, across a number of project-affected communities, the themes below reflect only perspectives from company-related meetings and requester-related meetings. This list is indicative of the issues heard by the Office. It is not meant to be exhaustive of every issue that was raised; rather, it reflects several themes that arose at numerous junctures in our discussions. The themes are listed in alphabetical order.

The Counsellor thanks all of the parties for their demonstrable efforts and goodwill to engage in the process so far. Further meetings are planned.