ARCHIVED - Economic Impact of International Education in Canada - An Update

We estimate that in 2010, international students in Canada spent in excess of $7.7 billion on tuition, accommodation and discretionary spending; created over 81,000 jobs; and generated more than $445 million in government revenue.

Altogether there were more than 218,200 long-term (staying for at least six months) international students in Canada in 2010, generating more than $6.9 billion to the Canadian economy. It is estimated that nearly 37 percent of that revenue came from two countries – China and South Korea. As of December 2010 there were 56,900 Chinese and 24,600 South Korean citizens in Canada undertaking a formal education program. Ontario and BC hosted nearly two thirds of the international students in Canada (85,300 and 60,500 respectively) while Quebec was a distant third.

In total, the annual expenditure of $8.0 billion by international students translated to estimates of almost $4.9 billion worth of contribution to GDP, 86,570 jobs, and $455 million of government tax revenue.

The quantitative results are summarized below. 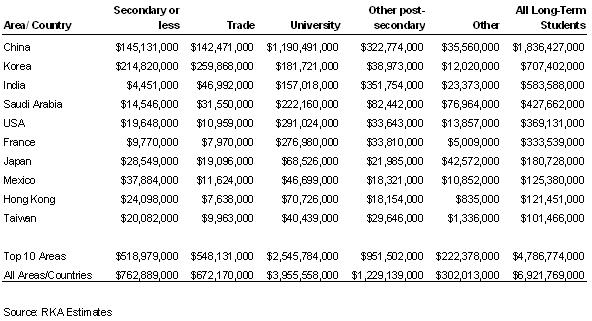 This report provides evidence showing that international students make a very significant contribution to the Canadian economy, job base and government revenues. Therefore, it is important to get more consistent, complete and accurate data on students and their expenditures in Canada. Such data is not readily available now. Therefore, we put forward the following recommendations:

Table of Contents - Next page