3. Assessing the economic impact of international students in Canada

Table 1 shows the total number of international students studying in Canada, with provincial and territorial distribution. The student numbers have also been broken down to show students that are considered “long-term” and those who are considered “short-term”.[10]

Source: Immigration, Refugees and Citizenship Canada and Languages Canada, with adjustments by RKA

The number of international students studying in Canada continues to grow steadily. In fact, the increase between 2015 and 2016 was substantial, from approximately 457,800 to 524,000, an increase of 14.4%. This has been driven mainly by an 18.0% increase in the number of “long term” students.[12] Detailed data indicates that Ontario contributed most toward the growth of long-term students; it had almost 36,000 more students in 2016 than it did in 2015, a 24.1% increase. Detailed data also indicates that of the top source countries for long-term students, the biggest increase was from India.

Figure 1: Distribution of the total number of international students in Canada, by province/territory, 2015 and 2016 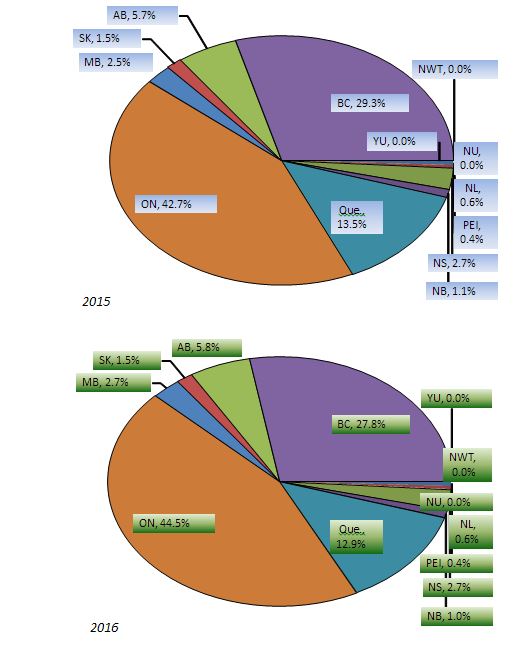 Source: Data from IRCC and Languages Canada with adjustments by RKA

Table 2 shows the annual spending incurred by these international students, including the additional tourism activities associated with visiting family and friends.[13] The data sources and adjustments to raw data to derive estimates of international student expenditures are detailed in Appendix 1.

Source: detailed data sources as reported in Appendix 1, with adjustments by RKA

Figure 2 illustrates the distribution of the total amount of international student expenditures in 2015 and 2016 by province and territory. In line with Figure 1, Ontario accounts for the largest share of total student expenditures of all provinces and territories in Canada, followed by British Columbia. The data in this figure also indicates that Ontario accounts for an even higher expenditure share than its student share (48.1% in 2015, which increased to 50.3% in 2016), which reflects the tuition fees of students studying in university programs.[15]

Figure 2: Distribution of total international student expenditures in Canada, by province and territory, 2015 and 2016 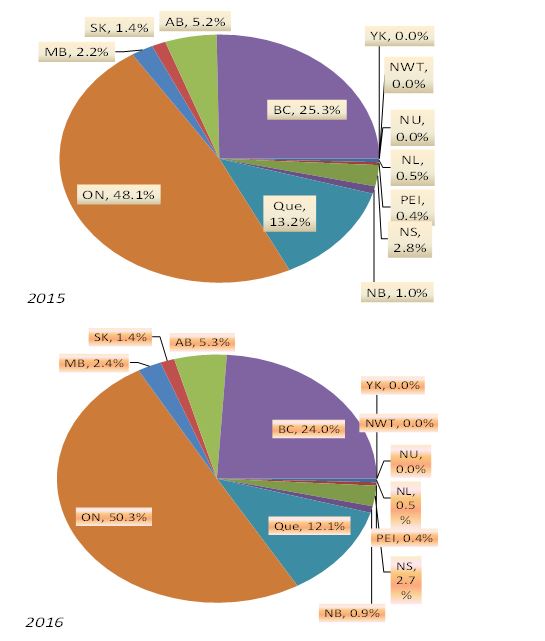 Source: RKA based on various adjustments detailed in Appendix 1

Table 3 above shows our estimates of the per-student cost of education and living while they stay in Canada. For long-term students, the average per-student expenditure (including tuition fees, other fees, books, accommodations and meals, transportation, and discretionary spending, but excluding spending from visiting family and friends) per year was estimated to be $33,800 in 2015 and $35,100 in 2016.

Short-term students had an average of $900 in total expenditures per week.

As we pointed out in the methodology section, when a person spends money on a product (goods and/or services), that amount creates a direct requirement for the production of that product. The economic impact, however, does not end there. The increased production of the product leads to increased production of all the intermediate goods and services that are used to make that product, which in turn generates more demand for other goods and services that are used to produce these intermediate products. As demand rises, workers are able to earn a higher wage, and they sometimes decide to spend a portion of their extra earnings on more goods and services. As such, the initial demand for a product creates a chain effect down the production process. This is referred to as the combined direct and indirect impact. Three types of impacts are usually estimated and they are described briefly here.

Although we present all three types of economic impact values associated with international students spending in this updated report, it should be noted that the report focuses on the combined direct and indirect impacts as representing a complete picture of economic impacts. It is generally acknowledged that direct impacts alone are incomplete and the total impact may sometimes overestimate the impacts of initial spending.

When we compare the value of total spending by international students with other sectors in the economy, GDP, employment and export values are the key variables of interest. Other variables that may be of interest to readers include output, labour income and tax revenues. The results are presented for the aggregate of all international students, as well as long-term and short‑term students separately.

To produce these impact values, we used Statistics Canada’s economic impacts simulation model to estimate international students’ contribution to each province’s GDP and employment.[16] Also reported are the values of output and labour income.[17]

Table 4 below presents the results of the combined direct and indirect economic impacts associated with all students in Canada, by province and territory, in 2015 and 2016.

In 2015, the total GDP contribution of all student expenditures amounted to over $10.5 billion in Canada, when both direct and indirect impacts were considered. Directly and indirectly, the international education sector supported over 140,010 jobs (or 118,640 full-time equivalent (FTE)).

In 2016, the combined direct and indirect GDP contribution of all student expenditures amounted to almost $12.8 billion in Canada, when we take into account not only the sectors directly impacted by international student spending, but also the many other industries in the supply chain of those directly impacted. In terms of employment, 168,860 jobs (the equivalent of 143,150 FTE) were supported. If we assume 10% lower total annual spending by international students, the resulting combined GDP impact would have been $11.4 billion, and $14.1 billion had we assumed 10% higher overall student spending.

Table 5 presents the corresponding direct and indirect impacts of international students who stay in Canada for at least six months on the province or territory’s output, GDP, employment and labour income.

The values show that the total GDP contribution of students who stayed for at least six months during the year amounted to almost $9.8 billion in 2015 in Canada. In terms of employment, international education services supported almost 129,800 jobs (the equivalent of 110,000 FTE) in Canada.

The comparable values show that the combined direct and indirect GDP contribution of expenditures incurred by long-term students amounted to over $12 billion in 2016 in Canada. In terms of employment, international education services and the goods and services in its supply chain supported 158,300 jobs (the equivalent of 134,170 FTE) in Canada.

When we take into account the spending of short-term language students who are studying in Languages Canada’s private member schools, these international students directly and indirectly contributed an additional $745.1 million to GDP and supported 10,240 jobs (the equivalent of 8,690 FTE) in 2015. The comparable values in 2016 were $770.1 million in GDP contributions and 10,590 jobs (or the equivalent of 8,980 FTE) supported. This is represented in Table 6.

It should be noted that, even though there were no annual student expenditures in Newfoundland and Labrador or the three territories, as there were no short-term students reported in 2015 or 2016, there were impact values in output, GDP, labour income and employment because of the effect of interprovincial trade.

Government revenue can be derived by Statistics Canada’s expenditure model to calculate the amount of indirect taxes incurred in the process of producing an industry’s outputs and services. It should be noted that Statistics Canada’s model estimates tax revenue impacts for the combined direct and indirect impacts, and total (direct, indirect and induced impacts) scenarios only.

In addition to indirect taxes, another type of tax revenue generated is income taxes associated with labour income.[19] Statistics Canada’s expenditure model did not automatically estimate personal income taxes. Instead, we derived the values by applying the average personal income tax rates in each province and territory to labour income, which is generated in Statistics Canada’s expenditure model.

The following three tables show our estimates of the tax revenue impacts, first for all international student spending in a year, and then for annual spending by long-term students and short-term students, respectively.

The total tax revenue generated by indirect taxes and personal income taxes associated with international student spending in 2015 was estimated to be $2.3 billion, when direct and indirect impacts were combined.

The total tax revenue contributed to all levels of government as a result of international student expenditures was more than $2.8 billion in Canada in 2016, when direct and indirect impacts were combined. If we assume 10% higher overall spending by international students, the tax revenue impact would have been $3.1 billion, and $2.5 billion if we assume 10% lower student spending.

[10] Detailed data pertaining to international students by level of study in each province and territory can be found in Appendices 5 and 6.

[11] It should be noted that the total number of “long-term students” reported here does not correspond with the figure reported on IRCC’s website on the number of international students with a valid permit on December 31, 2015 or 2016, as we have made a number of adjustments to arrive at these values. The number of “short-term” students in 2015 has been derived based on data received from Languages Canada. The number of students in 2016 has been estimated.

[13] Detailed data calculated for different types of student expenditures, for students in various levels of study, can be found in Appendices 5 and 6.

[14] It should be noted that there are no short-term international students reported in private Languages Canada membership schools in Newfoundland and Labrador, or the three territories.

[15] For a comparison of tuition fees for university undergraduate and graduate programs in different provinces across Canada, see Tables 47 and 48 in Appendix 5.

The impact of labour income includes three components: wages and salaries, supplementary labour income, and labour income of the unincorporated sector. This variable captures the return to labour in the make-up of GDP.

[17] Total industrial output refers to the value of outputs produced, whether the products are used as an intermediate product (think of a log cut down from a tree for the purpose of building a house, for example) or used as a final product (think of a beam in a completed house). If we calculate gross domestic product the same way we calculate the value of outputs, the cost of the log will be counted many times, as it moves from raw product to its eventual use as a beam, and it is wrong. The value of total industrial output therefore includes both the value of intermediate inputs and primary inputs, the latter being the labour and the capital needed in production. It is the sum of the latter, which is also referred to as the value added, that equals gross domestic product at the national or provincial level.

[19] Personal income tax values have been derived by applying the average personal income tax rates in each province and territory to labour income. Average personal tax rates have been derived based on data available from Statistics Canada’s CANSIM table 384-0040 - Current accounts - Households, provincial and territorial, annual.