We are pleased to table the Annual Report to Parliament on the administration of the Privacy Act for fiscal year 2018-2019, as required under section 72 of the Act.

The Privacy Act provides Canadian citizens and individuals present in Canada with the right to seek access to their personal information that is held by the federal government. It also governs the collection, use, disclosure, retention, and disposal of personal information.

Mandate of the Institution

Global Affairs Canada is Canada’s face to the world, working to advance Canada’s political and economic interests in the international community as well as to apply Canadian experience to help address global issues.

The Minister of Foreign Affairs is also responsible for the Export and Import Permits Act, RSC 1985, c. E-19, which authorizes the government to control and monitor the trans-border flow of specified goods, and for the Special Economic Measures Act, SC 1992, c. 17, which authorizes the government to apply economic sanctions in response to a serious threat to international peace and security.

The Access to Information and Privacy Protection (ATIP) Division is responsible for the administration of the Privacy Act, including the processing of requests and consultations. The Director of the ATIP Division reports to the Corporate Secretary, who in turn reports to the Deputy Minister of Foreign Affairs.

In 2018-2019, the ATIP Division employed 57 Full-Time Equivalents to fulfill the Department’s obligations under both the Access to Information Act and the Privacy Act. During most of the fiscal year, the Division’s staff included up to five consultants and one student.

The Division’s structure consists of a Director, five Deputy Directors, eight Team Leaders, one Senior Advisor, one Manager, one Administrative Assistant, forty-five Analysts, two System Administrators, and seven Clerks. This list includes the Privacy Policy and Governance Team which is comprised of a Team Leader and three Analysts who work exclusively on the application of the Privacy Act. It also includes one Team Leader and five Analysts dedicated to the Intake Team pilot project, which was launched in November 2018. Not all positions in the Division were staffed during the reporting period.

Highlights of the Report 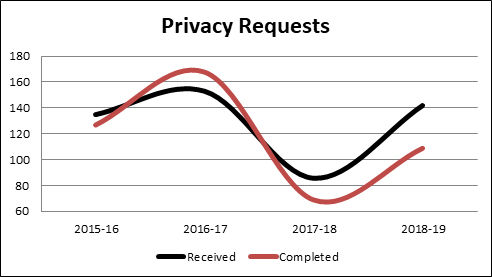 The Department’s deemed refusal rate in 2018-19 (i.e., the percentage of requests under the Privacy Act that received a response beyond the deadline required under the Act) was 39%. This represented a 6% increase over the deemed refusal rate for the previous reporting period and a 9% increase over the average of the previous three reporting periods.

In 2018-19, the Division had approximately 7 Full-Time Equivalents (FTE) working on Privacy Protection requests and Privacy Policies. This represented a 13% decrease over the previous reporting period. The Department took measures to improve its performance by staffing the ATIP Division with additional resources. 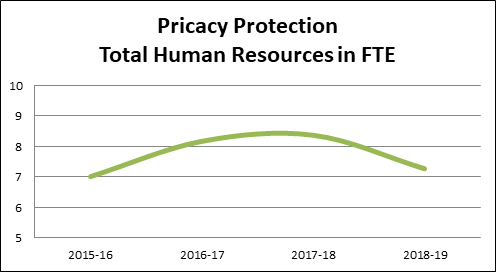 During the reporting period, the ATIP Division continued the process of reviewing and streamlining its operations. A very significant result of this process has been the Intake Team pilot project. The purpose of this team is to triage incoming requests and consultations, re-scope the requests and retrieve the relevant documents in order to alleviate the overall administrative burden for analysts. Early statistics indicate that analyst productivity will be increased by over 30%. The project was launched in November 2018 and is ongoing.

The following section explains key elements of the Statistical Report to the Treasury Board Secretariat provided in annex B.

In 2018-2019, the Department received 142 requests for personal information under the Privacy Act. In addition, 35 requests were carried over from the previous fiscal year, for a total of 177 active requests.

The disposition of requests for personal information received during the reporting period was as follows:

The exemptions under the Act most commonly applied by the Department during the reporting period were section 26 [information about another individual] (applied to 40 requests) and 27 [solicitor-client privilege] (applied to 9 requests).

During the reporting period, the Department disclosed 11,319 pages of the 14,106 relevant pages processed.

Consultations received from other institutions

During fiscal year 2018-2019, the ATIP Division continued to provide its analysts with the necessary training and tools to perform their jobs effectively, notably by ensuring that all staff members had learning plans in their performance evaluation agreements.

The ATIP Division benefited from its Professional Development Program, which allows the Department to train and promote its analysts from junior to senior levels. This program has been very successful in addressing recruitment, retention and succession planning issues. At the end of the fiscal year, 14 employees were in the program and further recruitment was underway.

The ATIP Division continues to develop tools and guidance material to assist and inform the Department. In an effort to foster meaningful dialogue with internal clients, a Departmental outreach event was held for Right to Know Week. In addition, during this reporting period, 685 employees completed an online interactive ATIP awareness tutorial, developed in collaboration with the Canadian Foreign Service Institute. Internal training initiatives for the ATIP Division also include the ATIP mentorship program, a legal workshop on jurisprudence, and guest speakers from the ATIP community.

To assist Consular officials in understanding their roles and responsibilities vis-à-vis the Access to Information Act and the Privacy Act in the context of providing consular services to Canadians, a specific training program was delivered to 66 employees on Confidentiality and Personal Information.

In order to decentralize the responsibility of training among teams, the ATIP Division introduced guidelines for delivering ATIP training. This yielded benefits such as relationship-building between analysts and subject matter experts, skill-building opportunities for analysts in the Professional Development Program, and ensured continuous training offerings throughout the Department. During the reporting period, at least 25 formal ATIP training sessions were delivered to approximately 199 employees.

As a result of the Lean initiatives of 2017-18, efforts have been made to foster more effective dialogue between the ATIP Division and subject matter experts. A yearlong rationale campaign has included outreach initiatives, and the provision of helpful statistics in order to identify areas for improvement. For example, the monthly Bureau Performance Report is now circulated by the Corporate Secretary and encompasses all bureaus whose internal deadlines have been missed. This has yielded a significant response from bureaus, and a renewed awareness of tasking deadlines.

With the assistance of the Senior Policy and Governance Advisor, the Intake Team pilot project has centralized administrative functions, and allows analysts to focus their efforts on the review of records. The Intake Team also serves as a training unit and assists in the onboarding of new employees. Once new employees have completed their term with the Intake Team, they are transitioned to regular portfolios. Upon this transition, they are further supported by the ATIP Division’s Mentorship Program, another Lean initiative.

During the Reporting Period, the Privacy Policy Group has undertaken significant efforts to improve its Information Management practices. The Case Management configuration was adapted and documented to improve oversight and operations. It initiated a study to adopt new software to better track correspondence and tasks. Practices have been streamlined to reduce administrative burden.

The Department continued to place a heavy emphasis on educating departmental officials on their ATIP roles and responsibilities to ensure compliance and efficiencies.

Of the 17 complaints received in the reporting period:

Of the 4 complaints closed during the reporting period:

The Department took the issue of complaints seriously and addressed any problems that were identified, notably through training. The Division had a dedicated officer dealing with the resolution of complaints.

The Department monitored the processing time for requests and tracked their status. The tools in place for this purpose included:

During the reporting period, the Department reported one material privacy breach:

PBR-2017-01189: Information relating to the Prime Minister’s visit to the National Governors’ Conference in Rhode Island and a staff member’s work-related/personal items were stolen from the trunk of the staff member’s rental car. The breach was reported to the Privacy Commissioner and to the Information and Privacy Policy Division of the Treasury Board Secretariat. In consultation with RCMP/departmental security, they are in agreement that the incident does not constitute a security breach. Various measures were taken to contain the material breach including informing the department’s Access to Information and Privacy Policy section, advising Washington’s IT section, remotely wiping and disabling electronics, and advising the GAC HQ security and Washington Mission Security. As part of a larger security initiative, all mission staff will be re-briefed on security protocols at the mission, including a discussion on security protocols for events outside of the mission to limit any further potential for a breach.

• The Diplomatic Registration System examined the privacy risks of the system for the accreditation/registration of foreign representatives and their family members when coming to Canada. The assessment identified potential risks and corresponding strategies to mitigate these risks.

• The Case, Contact, and Emergency Management (CCEM) Solution project PIA examined the privacy risks associated with the modernization of the COSMOS system with the introduction of CCEM and GAC’s broader “Going Digital” strategy. The assessment identified potential risks and corresponding strategies to mitigate these risks.

• The Ministerial Appointment activity PIA examined the privacy risks associated with the appointment process of ministers at Global Affairs Canada. The assessment identified potential risks and corresponding strategies to mitigate these risks.

Subsection 8(2) of the Privacy Act provides that “personal information under the control of a government institution may be disclosed” without consent under certain specific circumstances.

During fiscal year 2018-2019, the Department made a total of 32 disclosures pursuant to subsection 8(2)(m) of the Privacy Act. In 6 cases, the Department determined that the public interest in disclosing personal information clearly outweighed any invasion of privacy that could result. All other disclosures were determined to clearly benefit the individual to whom the information related.

32 disclosures pursuant to paragraph 8(2)(m) were made during fiscal year 2018-2019 and a total of 21 notifications were sent out to the Privacy Commissioner of Canada. The Division is currently in the process of sending out the remainder of notifications to the Privacy Commissioner of Canada for the disclosures made during the fiscal year 2018-2019.

The Minister of Foreign Affairs, pursuant to section 73 of the Privacy Act, hereby designates the persons holding the positions set out in the schedule hereto, or the persons acting in those positions, to exercise the powers and perform the duties and functions of the Minister of Foreign Affairs as the head of a Government institution under the sections of the Act set out after each position in the schedule. This designation replaces the designation dated October 2, 2009.

Part 4: Requests for Correction of Personal Information and Notations

Part 6: Consultations Received From Other Institutions and Organizations