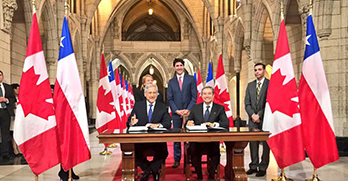 Blueprint 2020 envisions a Public Service that enables new and existing public servants to be in the right place, at the right time, doing the right things.This story covers how trade negotiators incorporated a Trade and Gender chapter in the modernized Canada-Chile Free Trade Agreement (CCFTA), providing a model for all future progressive free trade agreements.

Trade liberalisation has been a significant stimulus to Canada’s economic growth and prosperity. However, some argue that the opportunities and benefits that trade liberalization policies are intended to foster have not been broadly or equitably shared.

In response, the Department began the development of a Progressive Trade Agenda (PTA) to work to ensure that all segments of society can take advantage of and otherwise benefit from the opportunities that flow from trade and investment. The PTA reflects the Government’s vision that trade policies should be responsive and contribute more to broader economic, social, and environmental development. The Trade Agreements and NAFTA Secretariat (TCT) division took on this mandate and has been exploring approaches to help ensure that all Canadians see the benefit and opportunities associated with trade and investment.

One area of particular focus has been trade and gender – rooted in the understanding that trade is not gender neutral. Research shows that gender equality can create large economic benefits, as increased female labour force participation and increased female education leads to a more productive workforce and increased investment. Experience has also shown that trade agreements, and the cooperation that they have facilitated to reduce barriers to trade, have created positive economic outcomes for their signatories. However, significant gender-related barriers, which limit or distort trade, still exist. These barriers represent missed trade-related opportunities for economic growth in national and international economies. By working to remove them, women’s economic empowerment and gender equality stand to benefit.

While gender equality and the avoidance of discrimination based on gender is one of many elements that Canada has pursued during trade negotiations, notably via language regarding the elimination of employment discrimination in our Labour chapters, more recently we have sought to include more gender considerations in our FTAs.

The new Trade and Gender chapter represents a first for Canada and for any G7/G20 country. The chapter acknowledges the importance of incorporating a gender perspective into economic and trade issues to ensure that economic growth can benefit everyone. It also provides a framework for Canada and Chile to undertake cooperation activities on issues related to gender and trade; and it establishes a bilateral Committee under the Canada-Chile FTA that would oversee these cooperation activities.

The Trade and Gender chapter includes: references to the UN Convention on the Elimination of All Forms of Discrimination against Women, and to the UN Sustainable Development goal to achieve gender equality and empower all women and girls; a provision to enable the Gender Committee to work with other committees under the FTA to sensitize them to gender issues and considerations; including gender-based analysis and the collection of gender data as additional areas for cooperation; a strengthened institutional framework of the chapter in terms of reporting to the Free Trade Commission; and additional requirements concerning meeting frequency and public reporting.

While the Canada-Chile Trade and Gender Chapter was a first for Canada, we don’t intend to stop there: going forward, Canada seeks to incorporate gender provisions in future FTAs in order to help ensure that women and women-owned SMEs can benefit from the opportunities that flow from trade and investment. For instance, Canada is actively seeking a trade and gender chapter in the ongoing negotiations with the Pacific Alliance and its renegotiations of NAFTA. We are also seeking to identify areas outside of the trade and gender chapter to include other progressive, gender-related provisions.

This initiative has allowed public servants at Global Affairs Canada to be at the cutting edge of progressive trade policy, working and becoming experts on issues that few other countries in the world even have on their radar. The continued development of the PTA will enable public servants to help Canadians share in the advantages that trade can bring where and when the need it most; right here and right now.