Total Canadian merchandise trade posted a record high of nearly $1.18 trillion in 2018.Footnote 1 Exports increased for the second consecutive year in 2018, registering an all-time high of $584.2 billion, mainly on the back of higher average crude oil pricesFootnote 2 pushing up total energy exports to the United States. Proportionally, although the United States is still Canada’s largest export destination by far, the trend of slowly diversifying away from the United States continued in 2018, with the share of the U.S. in Canadian exports falling from 75.9% in 2017 to 75.0% in 2018. Imports also grew for the second consecutive year in 2018, reaching an historic level of $595.9 billion. This was led by energy product imports, primarily refined oil from the United States. 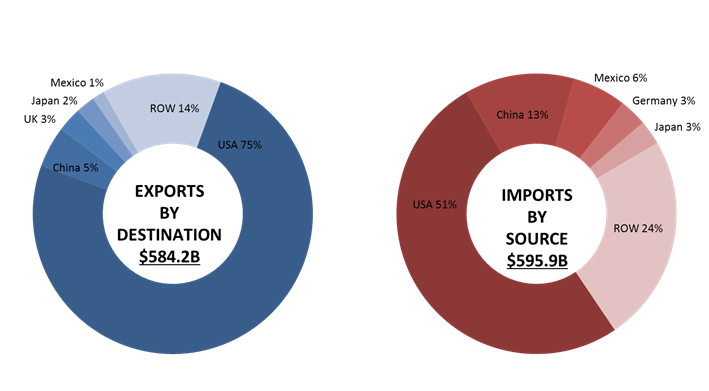 By commodity, rising average crude oil prices were behind the notable increase in exports of energy products, which accounted for nearly half of the growth in Canada’s merchandise exports in 2018. Other noteworthy growth occurred in machinery, pharmaceuticals, and wood pulp. Conversely, exports of automotive products and precious stones and metals saw large declines. On the import side, energy products led the growth, followed by machinery and electronic equipment.

Exports outperformed imports in 2018, so Canada’s merchandise trade deficit with the world narrowed from $15.2 billion in 2017 to $11.8 billion in 2018. Trade in resource-related commodities such as energy and wood products continued to be the drivers of exports for Canada, while trade in processed goods such as machinery and electronic equipment pulled down the overall trade balance. 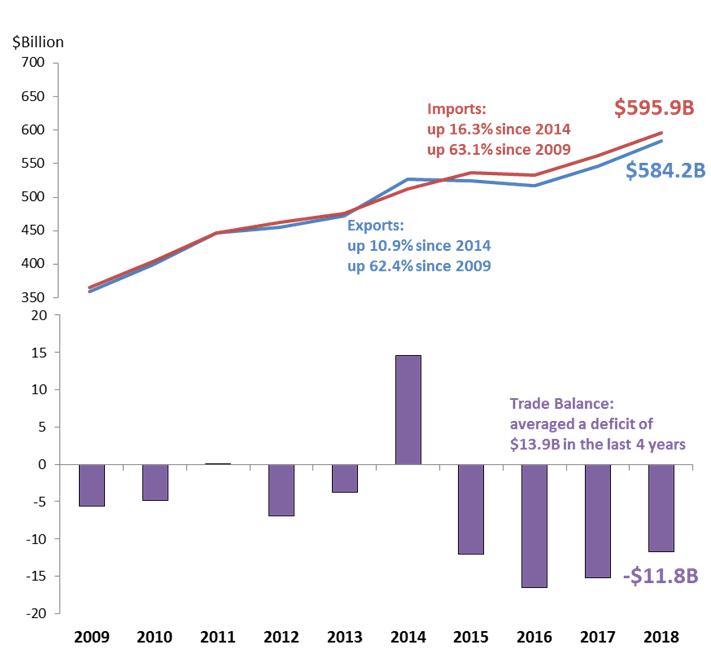 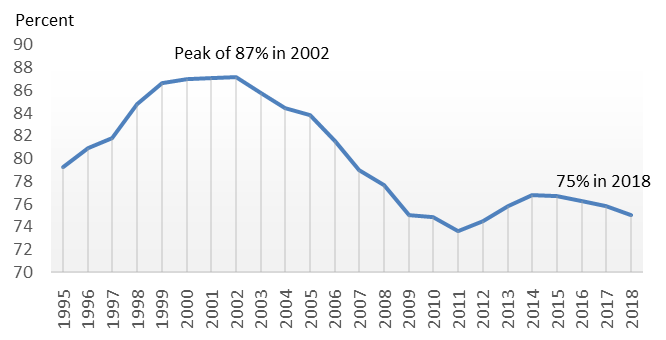 The European Union as a group is Canada’s second largest export market. With the implementation of Comprehensive Economic and Trade Agreement (CETA) as a catalyst, Canadian merchandise exports to EU members rose 7.0% to $44.5 billion in 2018, mainly on higher exports of energy products (+83.9%) and automotive products (+89.3%). Out of Canada’s top European export markets, exports to Germany and the Netherlands recorded double-digit growth of 16.8% and 51.1%, respectively. However, exports to the United Kingdom declined 7.7%, mostly due to a $1.9-billion decline in gold exports.

Growth of exports to top partners in Asia continued in 2018. Rising 17.1% or $4.0 billion, exports destined to China accelerated to the fastest rate since 2012. Last year’s growth was driven by exports of agriculture products (+32.0% or $2.5 billion, mainly oil seeds, cereals, and fats and oils), mineral ores (+35.7%), and wood pulp (+12.9%). Exports to Japan and South Korea also continued to grow in 2018, while those to India moved sideways. Most notably, merchandise exports to Hong Kong recorded the fastest growth by far among Canada’s top trading partners, surging 74.6% or $1.7 billion. This large increase was almost entirely due to the higher exports of gold and energy products (crude oil and coal).

For exports, the top ten export markets were responsible for 90.2% of total Canadian merchandise exports in 2018, down from 90.5% in 2017. Rank-wise, Germany (7th) and the Netherlands (8th) overtook India, which fell to 9th place, and Hong Kong jumped 3 places into the 10th spot. As a result of these changes, Belgium and France slipped out of the top 10 merchandise export markets in 2018.

Imports from the United States accelerated in 2018, up 5.7% to reach $304.6 billion, although slightly slower than the growth of Canada’s overall imports. Consequently, the U.S. share of Canada’s imports decreased marginally, to 51.1% from 51.4% the year before. More than half of the $16.3 billion increase in imports from the US came from energy products (+34.7% or $8.6 billion, mainly refined and crude oil). Another key part of the increase was due to the 6.4% growth (or $2.6 billion) in machinery imports, mostly bulldozers and turbojets. Other leading import categories were precious stones and metals (+30.7%), plastics (+5.0%), and aircraft and parts (+12.1%). No single commodity import recorded a significant decline in 2018, with the largest being iron and steel (-8.1% or $0.5 billion).

Coming off of double digit growth in 2017, imports from China slowed down in 2018, only rising 6.5% or $4.6 billion to reach $75.6 billion. This expansion was led by electronic equipment (+8.5%) and machinery (+7.0%). Imports from the European Union increased by 10.8% or $7.2 billion on higher imports from Belgium (+40.2%, mainly organic chemicals, automotive products, and pharmaceuticals), Germany (+6.3%, mainly machinery), and France (+16.0%, mainly machinery and aircraft and parts). Of other top import sources, imports from Mexico, South Korea, and Taiwan increased significantly, while those from Japan declined.

In 2018, energy products fortified its position as Canada’s top export commodity with growth of 17.2%, reaching more than $128.6 billion in exports or 22.0% of overall Canadian merchandise exports. Nearly ninety percent of the growth was due to the 23.6% or $16.5 billion increase in crude oil exports (+6.0% in volume and +16.6% in average price), with the rest from refined oil and coal exports. With growth of exports to countries other than the U.S. being much higher (37.3% vs 15.2% for the U.S.), the share of energy products destined to the U.S. slipped to 89.4%, down  1.5 percentage points compared to that of 2017. In particular, EU members increased their total share by 1.3 percentage points as exports of energy products more than doubled to the Netherlands (crude and refined oil), were up 155.0% to the UK (crude oil and coal), and tripled to Spain (crude oil).

In contrast, exports of automotive products, Canada’s second largest export commodity, saw the largest decline in value, down $2.5 billion or 3.1%. Lower exports of passenger vehicles to the United States were the main source of the decline, which was partially offset by increased exports of trucks and automotive parts. Automotive exports to Mexico increased slightly, while those to China decreased by nearly 15.0% percent (mainly passenger vehicles). Notably, exports of automotive products to the EU were up 89.3%, especially to Germany (+87.6%), Belgium (+317.6%), Italy (+295.7%), and Spain (+255.0%).

Top import commodities largely remain unchanged in 2018 from year earlier. Automotive products maintained its position as the top import product by rising 1.4% or $1.4 billion to reach $97.7 billion, led by imports of passenger vehicles (+4.5%, mainly Mexico and Japan) and tractors (26.2%, U.S. and Mexico), while imports of trucks posted a major decline of 11.6% or $2.4 billion (mostly from U.S. and Mexico). Since the growth of automotive imports was sluggish compared to the overall growth in Canadian imports, its share of total Canadian imports declined from 17.2% in 2017 to 16.4% in 2018.

Energy products were the main driver of import growth, advancing 23.5% or $9.1 billion, due to increased imports of refined oil (+37.0%, mainly from United States) and crude oil (+16.7%, mainly from United States and Saudi Arabia). Machinery imports, the second largest import product and the second largest driver of imports, saw a significant increase of 8.5% or $7.0 billion. As a result, its share of total Canadian imports increased by 0.3 percentage points to 15.0%. Growth in this category occurred primarily in imports of turbojets (+21.7%), computers (+8.8%), and bulldozers (22.8%). Imports of electronic equipment had the third largest contribution to growth, up 4.7% or $2.6 billion, mainly due to the $1.2 billion increase in cellphone imports (mostly from China and South Korea). Other top products worth highlighting include: articles of iron and steel (+10.1%), precious stones and metals (-9.8%, mainly gold from Japan), and organic chemicals (+14.5%).

By commodity, Canada continues to exhibit comparative advantage in resource-related categories, as the five largest trade surpluses were all related to resource exports. Specifically, crude oil led all products with a trade surplus of $67.3 billion, which was up $13.8 billion over 2017. On the other hand, four out of five largest trade deficits are in processed goods. These products largely remain the same as in 2017, with the only exception that articles of iron or steel replaced pharmaceutical products as the 5th largest trade deficit in 2018. Worth noting that even though trade balance in passenger vehicles remains positive, its trade surplus was down $8.9 billion to $14.3 billion in 2018.

All data is in Harmonized System (HS) classification and reported on the Customs basis, as opposed to the Balance of Payments Basis.

Western Canada Select (WCS) oil prices rose over the first 5 months of 2018 before falling until November and have rebounded ever since.