Rapid Response Mechanism (RRM) Canada conducts research to understand potential foreign threats against Canada, including looking for emerging tactics and trends online. This enables RRM Canada to share information and help fulfill the obligations of G7 RRM members outlined in the commitments made during the Charlevoix Summit.

RRM Canada’s mandate is to monitor for and analyze potential cases of foreign interference, regardless of the political party affected or political nature of any given issue. Its objective is to articulate the trends and tactics employed by foreign actors as it pertains to interference in democratic processes and institutions and to track and understand their evolution. It analyzes the data by mapping the threat landscape and providing a factual illustration of the trends or tactics based on data observed. The focus is therefore on the content shared through social media in order to undertake network analysis and to monitor the exchange, flow or amplification of content—all with the goal of identifying potential indicators of foreign interference. RRM Canada is not mandated to comment on the content itself (that is, it is not a fact-checking entity).

RRM Canada conducted an analysis of the Alberta election to see if there were any indications of potential foreign interference. Based on international lessons learned, including on what issues may be targeted by foreign actors, the Alberta election was identified as being at risk of interference because of the extent to which environmental issues were debated. For example, the pipeline has been noted as a socially divisive issue that may be a target for foreign actors. The Alberta election analysis included open source data gathered in the lead-up to the provincial elections, held on April 16, 2019, with the purpose of identifying any emerging tactics in foreign interference and drawing lessons learned for the Canadian general elections scheduled to take place in October 2019.

RRM Canada did not find any evidence of foreign interference in the Alberta elections. However, in its analysis, it found that some national actors were disseminating material using tactics that were similar to those used by foreign actors.

This report analyses open source data gathered in the lead-up to the provincial elections in Alberta held on April 16, 2019. Its purpose was to identify any emerging tactics in foreign interference and draw lessons learned for the Canadian general elections scheduled to take place in October 2019. Prepared in support of the G7 Rapid Response Mechanism (RRM), the report was penned by RRM Canada. The RRM is mandated to strengthen G7 coordination to identify and respond to diverse and evolving threats to G7 democracies, including through sharing information and analysis, and identifying opportunities for coordinated response.

Based on primary and secondary research, RRM Canada concludes that there were very likely no significant foreign interference campaigns targeting the Alberta election in the online space in April 2019. However, coordinated inauthentic activity was detected:

[1] RRM Canada reviewed social media data to search for obvious cases of coordinated, inauthentic behaviour with the objective of identifying any potential foreign activities. Based on available information, it is very unlikely there was any foreign interference. The two largest components of the graph are made up of supporters of the former Premier Notley and Premier Kenney, as expected in an election campaign [Annex A].

[2] RRM Canada assesses that none of the major communities taking part in online conversations related to the elections are driven by foreign interference. The presence of automated inauthentic activities does not appear central or crucial to the overall conversation or activity.

[3] RRM Canada’s findings stand opposite to the April 11, Press Progress article, which summarizes the findings of a MentionMapp Analytics report, claiming that a third of accounts talking about the Alberta election were bots. RRM Canada’s findings, using multiple tools and methods, judges that the online activity is very unlikely to comprise one third of bots. RRM Canada therefore does not support the findings summarized in the Press Progress article.

[4] RRM Canada identified communities that demonstrated a suspicious account creation pattern that is indicative of troll or bot activity. Recent spikes in account creation suggest the presence of accounts developed for a specific purpose; however, the community was determined to very likely be domestic, as it was mainly comprised of supporters of the United Conservative Party (UCP). A second small community was identified as supporters of the People’s Party of Canada, which had similar suspicious patterns of account creation. This pattern was not identified within communities of supporters of the Alberta Liberal Party or Alberta New Democratic Party. The overall number of accounts is a small percentage of a larger community [Annex B]. This highlights a key point, namely that domestic actors are also emulating the tactics used by foreign actors, within the context of provincial elections. This behaviour will make it increasingly difficult to distinguish national from foreign interference efforts in the upcoming Federal election.

[5] RRM Canada identified a small group of anonymous accounts pushing a pro-separation movement in Alberta and the Prairies. Though Alberta has an official separatist party, https://albertaindependence.ca/, these accounts do not appear affiliated with this movement. Creating false separatist movements or amplifying domestic ones is a known tactic in foreign interference. Though unaffiliated, at this time, RRM Canada cannot tie this small group of accounts to any foreign entity.

[6] In its review of the data of this election, RRM Canada found no evidence supporting a broad, coordinated campaign to influence the Alberta election. RRM Canada assesses that automated inauthentic behaviour and trolling activities are very likely domestic in nature.

Disclaimer:  G7 Rapid Response Mechanism Canada (RRM Canada) monitors and shares information consistent with Canada’s privacy laws and the Ministerial Direction for Avoiding Complicity in Mistreatment by Foreign Entities. The information sharing practices of Global Affairs Canada are subject to review by the Privacy Commissioner, the Information Commissioner of Canada, the Office of the Auditor General and the National Security and Intelligence Committee of Parliamentarians, among others. Nothing in the present document shall be construed as adding any obligation or normative commitment under international or national law for any G7 member.

This Annex is a visual representation of RRM Canada’s data illustrating a high level of normality in the online conversation related to the Alberta provincial election. The analysis of activity would have been noteworthy for RRM Canada if there were other communities that rivaled the main political communities in size, but were predominately unknown actors, or actors from another geographical location.

A review of the account creation dates of accounts in the community of UCP supporters. The size of the final spike is an indicator of inauthentic activity. One indicator of bot activity is a large number of recently-created accounts. In this case, a large spike in accounts created in Q1 2019 is suggestive of inauthentic activity by either automated accounts or anonymous accounts. This combined with a qualitative evaluation of the accounts by RRM Canada, as well as their posting behaviours and the social network analysis; these are indications of likely inauthentic behaviour. 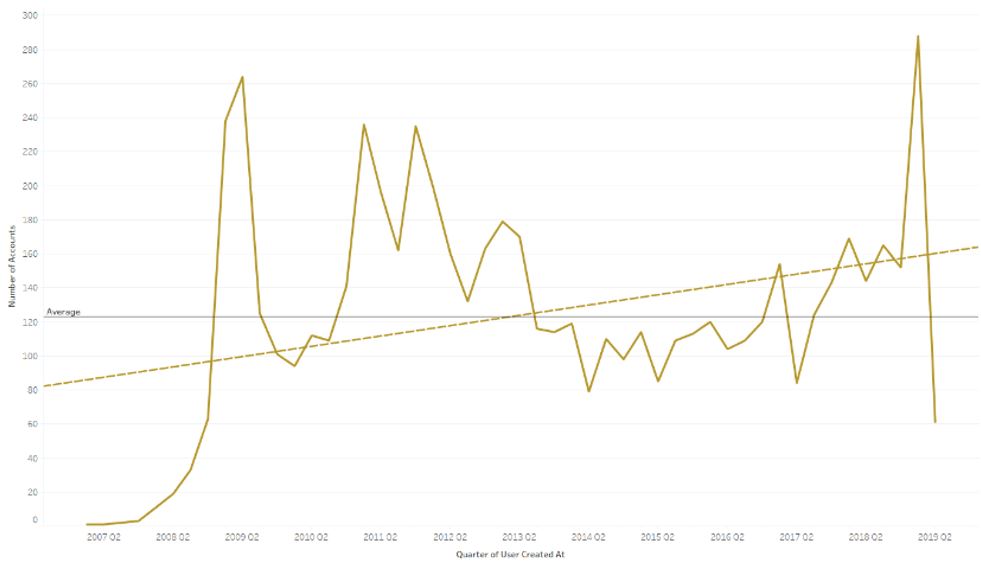