(No. 378 - December 15, 2011 - 4 p.m. ET) The Honourable Ed Fast, Minister of International Trade and Minister for the Asia-Pacific Gateway, today welcomed the successful conclusion of negotiations in Geneva to modernize the World Trade Organization’s Agreement on Government Procurement (GPA) and expand market access opportunities for the 15 parties—covering a total of 42 WTO members—to the agreement.

Following today’s conclusion of talks, it is expected that the agreement will be ready for signature by the parties before April 2012.

The revised agreement means Canadian businesses will have greater access to the government procurement markets of other GPA parties for a range of goods and services. According to WTO estimates, the total value of new market access opportunities is expected to be between $80 and $100 billion and rise to $450 billion once new WTO members gain accession to the GPA. As the primary international instrument governing procurement, the GPA’s rules and procedures are designed to strengthen the efficiency of the procurement process and the effective management of public resources.

“Concluding these negotiations for a new agreement is proof of the value of the multilateral trading system and that the WTO is an effective vehicle to combat protectionism,” said Minister Fast. “This revised agreement will contribute to our government’s efforts to boost Canada’s economy and create jobs and economic prosperity for hard-working Canadians.”

Moreover, it is expected that today’s announcement will help spur the accession of new parties to the agreement, including several emerging and fast-growing economies, such as China.

For more information on this agreement, please consult The plurilateral Agreement on Government Procurement (GPA). 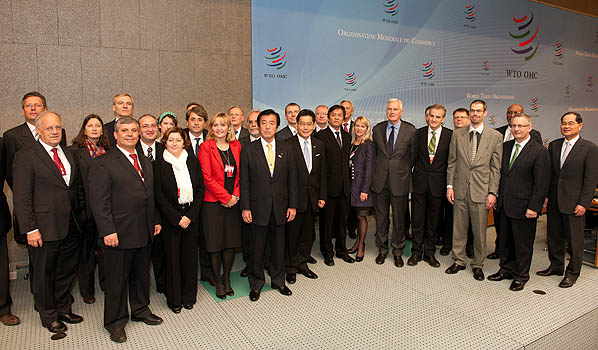 The WTO Agreement on Government Procurement (GPA) establishes specific obligations relating to non-discrimination, competition and transparency in government purchasing of goods and services. It applies only to those WTO members that have agreed to be bound by its terms. Currently, there are 15 parties to the GPA—one of those parties, the European Commission, represents its 27 member states—and 22 observers. The 15 parties to the GPA are Armenia; Canada; the European Union; Hong Kong, China; Iceland; Israel; Japan; the Republic of Korea; Liechtenstein; Aruba (the Netherlands); Norway; Singapore; Switzerland; Chinese Taipei; and the United States. All in all, they cover 42 WTO members.

The GPA provides suppliers of GPA parties with guaranteed, non-discriminatory access to certain opportunities in the government procurement markets of other parties. Specifically, each party identifies the government organizations that are subject to the Agreement, as well as the types of goods, services and construction services that will be covered and any exclusions or restrictions. The Agreement only applies to government procurement whose value exceeds a threshold amount specified in the annexes. While the Agreement covers a broad range of goods, services and construction services, defence-related procurement is excluded. The Agreement does not prevent parties from taking action necessary to safeguard the public interest, such as safety and environmental protection.

After over a decade of effort, the negotiations to modernize and expand the Agreement reached a successful conclusion on December 15, 2011. The results include significant improvements in the text of the Agreement that will enhance transparency and reflect contemporary procurement practices such as electronic notifications. The revised Agreement will also significantly expand access to procurement opportunities in the procurement markets of GPA Parties.

Canada contributed significantly to the successful outcome of negotiations. As a result of the Canada-United States government procurement agreement of February 2010, Canada offered the same provincial and territorial commitments in that treaty to other GPA parties. In exchange, Canadian suppliers have gained new access to procurement opportunities at the sub-national level in other GPA parties, meaning that Canadian suppliers will now no longer be disadvantaged in those procurement markets as compared to their U.S., EU and Japanese competitors. In addition, the same federal crown corporations that are currently included in Canada’s NAFTA procurement commitments are now covered under the GPA. The Agreement does not cover Canadian municipalities, school boards, academic institutions and hospitals.

The conclusion of negotiations is also an important step in expanding the membership of the GPA to other WTO members.