March 26, 2012 - The Honourable Ed Fast, Minister of International Trade and Minister for the Asia-Pacific Gateway, today hailed the recent conclusion of a number of commercial agreements as proof of the ever-growing commercial ties between Canada and Japan. Minister Fast made the announcement while accompanying Prime Minister Stephen Harper on his visit to Japan from March 25 to 26.

“Canada has strong and growing ties in the Asia-Pacific,” said Minister Fast. “Deepening Canada’s trade and investment ties with large, dynamic economies like Japan is a key part of our plan to create jobs, growth and prosperity for Canadian workers, businesses and families.”

In Tokyo, Minister Fast witnessed a commercial agreement whereby Canadian Solar Japan K.K. will build a two-megawatt solar plant in central Japan. The company will be the first foreign manufacturer to build and operate a solar plant of this size in Japan. Minister Fast also welcomed the announcement by city of Québec-based Medicago Inc. of a $10-million investment by Mitsubishi Tanabe Pharma Corporation in Medicago to support a strategic alliance between the two companies.

The Minister also welcomed four additional announcements made during the Prime Minister’s visit:

In addition, more than 18 other commercial announcements have been made recently, further signalling the robustness of the Canada-Japan relationship.

“I am pleased to be back in Japan to welcome the commercial deals that have happened since my visit last November,” said Minister Fast. “With yesterday’s announcement of the launch of Canada-Japan free trade negotiations, I expect our mutually beneficial trade and investment ties will only intensify. The deepened trade and investment ties between our two countries will benefit Canadians and Japanese alike.”

The Minister also highlighted the role that the Canadian Trade Commissioner Service played in facilitating many of the commercial agreements and encouraged Canadian businesses to take advantage of the numerous services offered by the Government of Canada.

For more information on the Prime Minister’s visit to Japan, see Ministerial Visit to Asia. 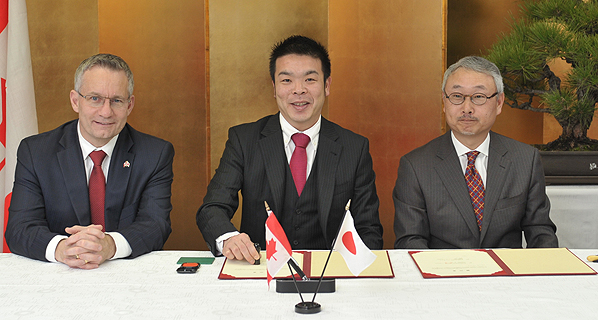 A backgrounder on the commercial agreements follows.

The following commercial agreement was witnessed by the Honourable Ed Fast, Minister of International Trade and Minister for the Asia-Pacific Gateway, during his visit to Japan.

The following agreements were signed or announced during Prime Minister Stephen Harper’s visit to Japan:

Minister Fast also welcomed a number of recent announcements demonstrating the growing commercial ties between Japan and Canada, including: