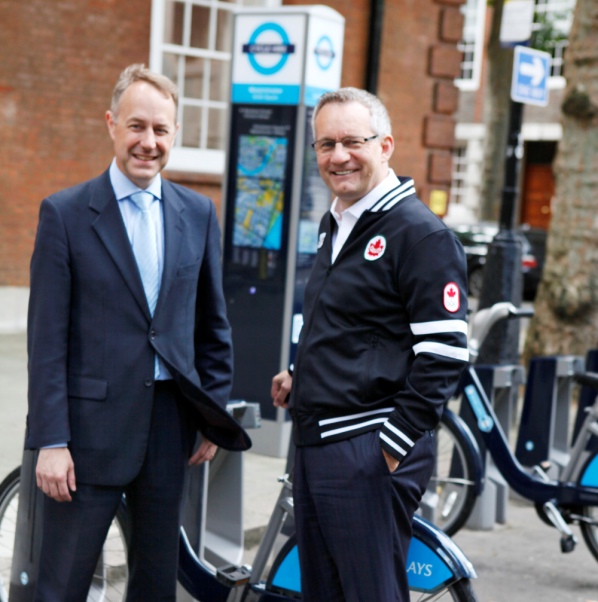 August 6, 2012 - London - The Honourable Ed Fast, Minister of International Trade and Minister for the Asia-Pacific Gateway, is given a tour of public bicycle sharing facilities, part of a system that was launched in London in July 2010. The highly successful program, embraced by London’s Mayor Boris Johnson, is based on Montreal’s innovative Bixi cycle rental system with components and bikes manufactured by Quebec companies, Robotics Design, Devinci Cycles and 8D Technologies, with Quebec designer Michel Dallaire and Canada’s Morrow Communications involved in the design and communications strategy respectively. There are some 8,000 “Boris Bikes,” as they are affectionately known, and 570 docking stations that are being used during the London 2012 Olympic Games. The bicycles and docking stations, consisting of wholly Canadian technology, provide excellent visibility of Canadian innovation on the world stage during the London Games. The Bixi cycle rental system has been successfully exported to a number of cities worldwide, including Boston, Melbourne, Minneapolis and Washington, D.C.

Minister Fast is in London to promote Canada’s strong economic fundamentals and competitive advantages to international business leaders and investors from around the world and meet with his key trade counterparts.