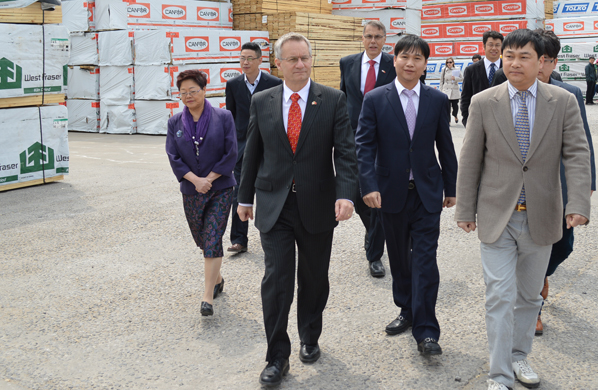 April 17, 2013 - Tianjin, China - The Honourable Ed Fast, Minister of International Trade and Minister for the Asia-Pacific Gateway, visits one of China’s top importers of Canadian wood products, Tianjin Jiayu Industry and Trade Co. Ltd., based in Tianjin. Canada is now China’s largest supplier of imported lumber. The value of Canadian wood exports to China has increased almost 24-fold, from $58 million in 2002 to over $1.4 billion in 2012.

Minister Fast toured the company’s facilities, including the lumberyard and one of two wood-frame demonstration houses built with professional technical guidance from the Canadian Forestry Association. The houses feature Canadian spruce, pine and fir, and oriented strand board. Canada promotes wood-frame construction as a versatile building solution to address China’s housing needs. In addition, Canadian wood is a green building material that is safe, modern and cost-effective.

Minister Fast is on a two-week visit to Asia that includes stops in the cities of Tokyo, Yokohama, Hong Kong, Beijing, Harbin and Tianjin before he attends the Asia-Pacific Economic Cooperation Ministers Responsible for Trade meeting in Indonesia.