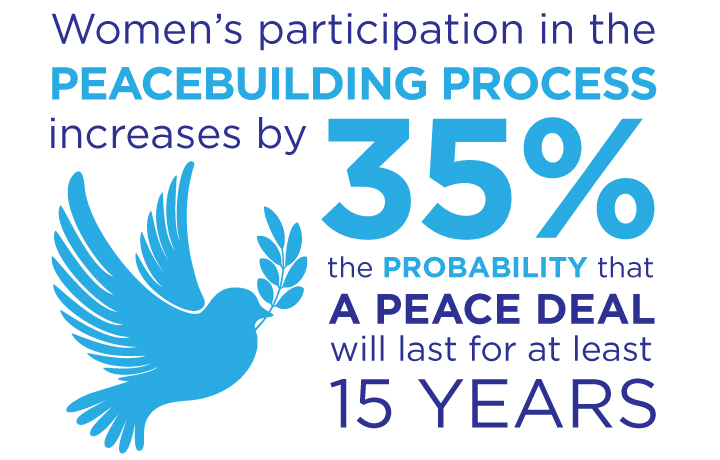 Women and girls around the world face discrimination based on their gender. Displaced women and refugees are especially vulnerable. They are most vulnerable to conflict-related sexual violence.

At the same time, women and girls play a key role in preserving their communities. Their economic and social responsibilities may increase in times of war. They often act as agents of peace, leading movements that eventually bring the warring parties to the negotiation table. Women often address the root causes of a conflict and increase community buy-in.

Our commitment to the global women, peace and security agenda

Canada knows that sustainable peace is only possible when women are fully involved in the resolution of conflict, and peace and security efforts. More inclusive, gender-equal and peaceful societies are possible, when women participate in:

Security Council Resolution 1325 (2000) on women, peace and security was the first resolution to recognize the unique and disproportionate effects of armed conflict on women and girls. It urges Member States, the UN, and other actors to address these circumstances.

Today, the women, peace and security agenda is comprehensive. It is comprised of eight resolutions, and it calls on the international community to, among other things:

To date, 79 countries have established National Action Plans on Women, Peace and Security to advance this agenda. Canada launched its first National Action Plan in 2010 for the 2011-2016 period. We have tabled five annual progress reports in Parliament. The plan emphasized:

On November 1, 2017, the Government of Canada launched Canada’s second National Action Plan on Women, Peace and Security for the 2017-2022 period.