On January 8, 2020, Ukraine International Airlines Flight 752 was shot down minutes after taking off from Tehran, Iran, by an Iranian surface-to-air missile. Fifty-five Canadian citizens and 30 permanent residents were among the 176 people killed in this national tragedy. Canada’s priority is to provide the families and loved ones of the victims with the support they need.

Canada continues to work with international partners to ensure a thorough and credible investigation into this tragedy, and hold Iran accountable for its violations of international law. An International Coordination and Response Group to support families of victims of PS752 was formed by Afghanistan, Canada, Sweden, Ukraine and the United Kingdom to ensure a full and transparent investigation into the causes of the fatal crash and coordinate legal efforts to pursue accountability and reparations from Iran so that families and loved ones may get the answers they deserve. 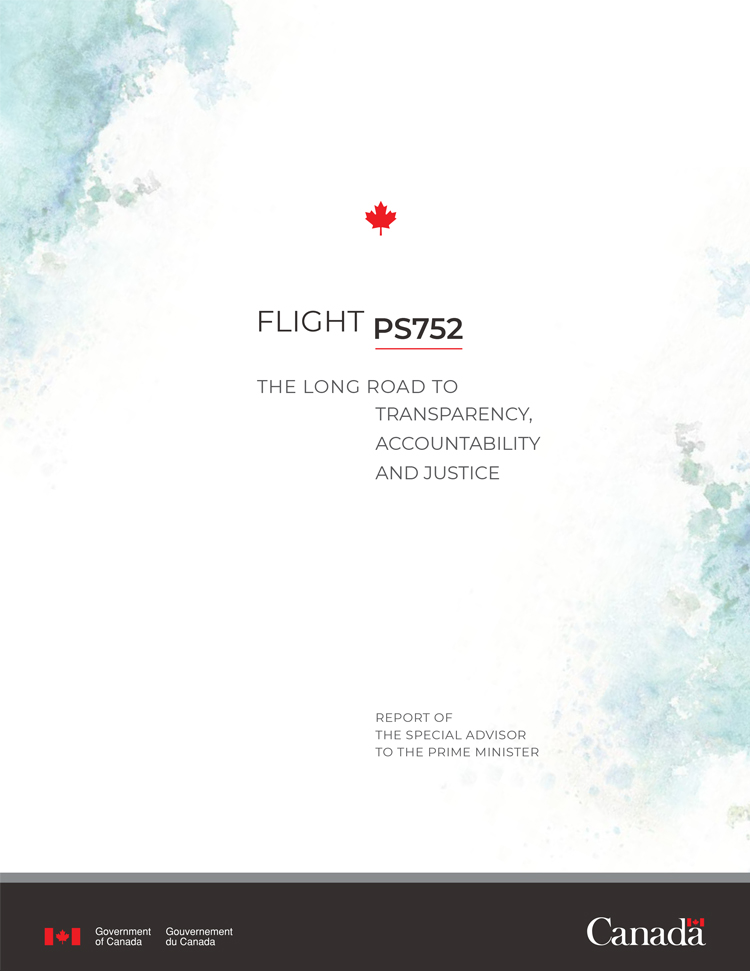 On March 31, 2020, Prime Minister Justin Trudeau appointed the Honourable Ralph Goodale as his special advisor to:

On December 15, 2020, Mr. Goodale released the report Flight PS752: The long road to transparency, accountability and justice. It examines what happened to PS752 and provides a summary of the Government of Canada’s response, a chronology of events and Mr. Goodale’s recommendations on best practices.

Assistance for families of victims

Canada’s Emergency Watch and Response Centre provided emergency support to the families of the crash victims during the crisis. Global Affairs Canada’s PS752 task force also has regular conference calls with families to keep them up to date on the situation.

Immigration, Refugees and Citizenship Canada set up a dedicated email address to provide assistance to family members of the victims who needed to travel to Iran and required travel documents on an urgent basis or who needed to remain in Canada temporarily.

Ukraine International Airlines (UIA) arranged for bereavement counselling to be provided to family members of victims.

Health Canada put in place a free and confidential 24/7 Crisis and Counselling Support Line for the many families experiencing grief and loss as a result of this tragedy. Family members in Canada could call to request support from a mental health professional or receive referrals to resources in their community. This support line was also available to close friends of victims as well as any impacted community organizations based in Canada.

The RCMP coordinated efforts with local police across the country to offer support to all family members upon their return to Canada.

The Government of Canada gave families of the victims who are Canadian citizens and permanent residents $25,000 per victim to assist with their immediate needs. Canada is also working with its international partners, including through the International Coordination and Response Group, to ensure that families are compensated according to the liability provisions established under international law.

On January 22, 2020, the Government of Canada announced it would match donations made to the Canada Strong campaign up to $1.5 million. This fund was developed to support families of the victims as they navigate through the long-term impacts of these tragic losses. The matching of donations ended on February 21, 2020, with over $1.7 million raised. Through donations and federal matching funds, this national campaign raised a total of $3.29 million to help the families of the victims of Flight PS752.

Canada is working with its allies to advocate for thorough and credible investigations to uncover the causes of this terrible tragedy, to bring transparency, accountability and justice to Canadians and to help families seek closure as they continue to grieve.

Since learning of the accident, the Transportation Safety Board of Canada (TSB) has been in direct contact with the AAIB. Given the high number of Canadian fatalities, the TSB has “expert” status in this investigation, in accordance with Annex 13 of the Convention on International Civil Aviation. Expert status does not allow active participation in the investigation. At Iran’s invitation, the TSB visited the accident site and examined the aircraft wreckage.

The TSB was invited to take part in the download of the flight recorders. A team of TSB investigators, including recorder specialists, participated in this technical process in Paris, France, the week of July 20, 2020. Data from these flight recorders was successfully downloaded and preliminary analysis was carried out.

The download and analysis of flight recorders is part of any aircraft investigation and assists experts in building a complete and factual sequence of events.

The download and analysis of flight recorders is part of any aircraft investigation and assists experts in building a complete and factual sequence of events.

Canada and the other members of the International Coordination and Response Group for the victims of Flight PS752 have called for accountability for those responsible for the tragedy through an independent criminal investigation followed by transparent and impartial judicial proceedings that conform to international standards of due process and human rights.

Representatives of RCMP Federal Policing National Security are engaged with their Ukrainian counterparts to determine the best methods to support the Prosecutor General of Ukraine’s investigation into the matter under Ukraine’s criminal law. The RCMP is undertaking investigative steps to preserve any evidence that may reside in Canada.

The path to justice

On January 16, 2020, Canada and its International Coordination and Response Group partners created a legal subcommittee to coordinate their efforts to hold Iran accountable for its violations of international law. The goal of the legal subcommittee is to obtain justice for the victims, the families and the affected states. A dedicated team of lawyers from Global Affairs Canada and the Department of Justice Canada has been working with its legal subcommittee counterparts in advance of negotiations with Iran on reparations.

On July 2, 2020, the Honourable François-Philippe Champagne, Minister of Foreign Affairs, and his counterparts from Afghanistan, Sweden, Ukraine and the United Kingdom signed a memorandum of understanding on cooperation regarding negotiations on full reparations by Iran. This important step reflects the commitment of all five nations to work together as a united front toward the goal of securing justice for the victims, and formalized how the International Coordination and Response Group will cooperate prior to, and during, the negotiations.

Canada and these nations are now working toward the development of a common negotiation position establishing the framework for unified legal positions. The common negotiation position reflects the five nations’ efforts to ensure that consensus is achieved in our understanding of all key principles of international law principles in advance of our negotiations with Iran on reparations. The development of common positions is a vital step in holding Iran accountable for its violations of international law and obtaining justice.

Prime Minister Justin Trudeau announced on February 14, 2020, that Canada is developing a Safer Skies Strategy, which will bring together partners to establish a common set of practices to better protect passengers from the risk of flying in or near foreign conflict zones. The implementation of this strategy will help improve aviation safety and prevent tragedies like Ukraine International Airlines Flight PS752 from ever happening again.

As part of the Safer Skies Strategy, Canada has established its own Conflict Zone Information Office after closely studying international best practices. This office will enhance Canada’s ability to monitor foreign conflict zones and to rapidly warn air operators of new or emerging risks.

Internationally, Canada is facilitating the realization of key initiatives under the Safer Skies Strategy, including the following:

At the beginning of 2020, Canada spearheaded the development of a working paper calling on the ICAO Secretariat to conduct a comprehensive gap analysis of the risks conflict zones pose to civil aviation and propose a way forward. Canada is working on the gaps analysis. In addition, Canada’s Minister of Transport, the Honourable Marc Garneau, has on three separate occasions intervened at the ICAO on matters related to protecting global civil aviation from the risks associated with conflict zones.

The Government of Canada is monitoring the situation closely in the Middle East and is in close contact with the U.S. Federal Aviation Administration and other international partners.

For more information and updates on the security situation in Iran, consult Canada’s travel advice and advisories.