The High Commission of Canada in Guyana joined the world in observing International Women’s Day (IWD) 2021 under the theme #ChoosetoChallenge, with a virtual but impactful campaign through collaborations with partners in Guyana and Suriname.

The High Commission was pleased to have its activities executed under the patronage of Her Excellency, Arya Ali, First Lady of Guyana, with the support of the Honourable Dr. Vindhya Persaud, Guyana’s Minister of Human Services and Social Security. Both First Lady Ali and Minister Persaud had recently partnered with the High Commission during its 16 Days of Activism Campaign.

The High Commission recognises that the COVID‑19 pandemic has exposed the deep economic and social disparities between men and women despite advances made over the years to promote the rights of women and girls. Even though women have been on the front lines of pandemic response and recovery in both Guyana and Suriname, they have also faced its dire impacts such as alarming levels of domestic and intimate partner violence, increased and unacknowledged childcare responsibilities and economic insecurity. 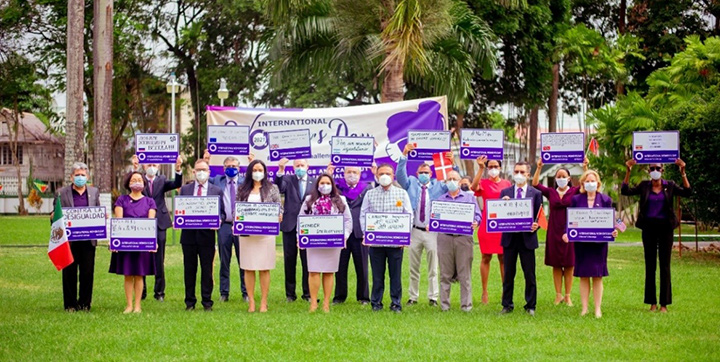 In their own language, each Head of Mission, with Her Excellency and Minister Persaud, committed to #ChoosetoChallenge a barrier to gender equality

In order to add a stronger voice to the calls for gender equality, in the largest collaboration of it’s kind among missions in Guyana, the High Commission was able to garner the support of First Lady Ali, Minister Vindhya Persaud and 13 Heads of Missions from Guyana’s international community, to join High Commissioner Mark Berman to challenge the barriers to gender equality and advocate for women’s empowerment. The photos and messages were shared on the High Commission’s social media pages and as well as the platforms of several of the participating missions, inclusive of the United Nations in Guyana.

The staff at the High Commission also joined in on the photo campaign and supported International Women’s Day by wearing purple and white t-shirts as a team. 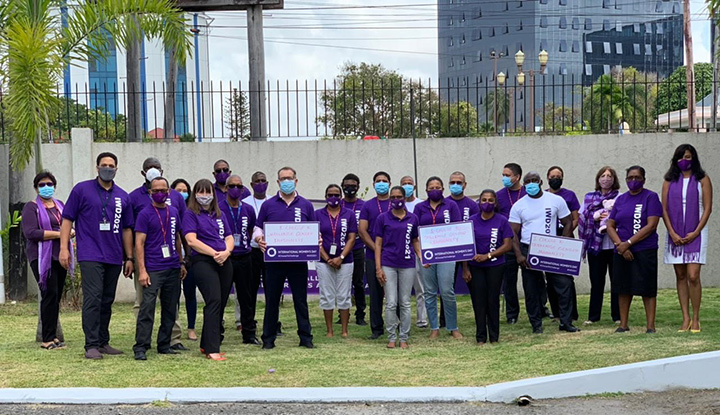 In addition to the High Commission’s official photo exercise, other partners in Guyana joined the mission’s campaign by posting photos of their own in support of International Women’s Day. Two of such partners were the Chief Justice of Guyana (a.g), Madame Roxanne George and the Chancellor of the Judiciary (a.g.), Madame Yonette Cummings-Edwards. These two influential women came together and were joined by some of the female staff of the Supreme Court of Guyana for an IWD photo which they shared on the court’s social media page. This photo was taken in front of the IWD sign that was erected by another partner of the High Commission, the Guyana Bank for Trade and Industry. 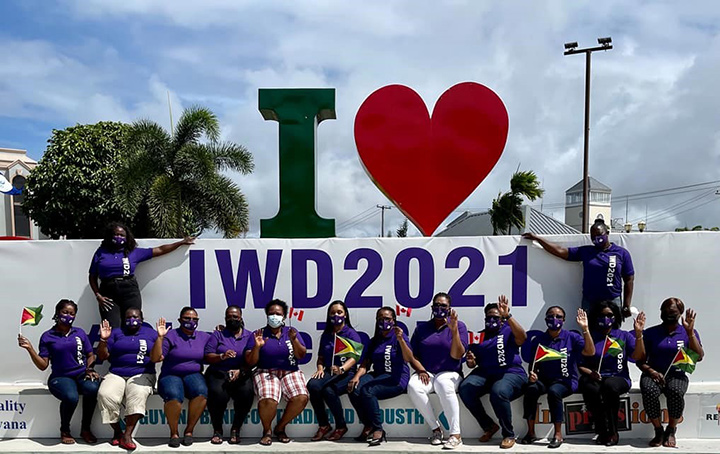 Chief Justice (a.g), Madame Roxanne George and Chancellor of the Judiciary (a.g.), Madame Yonette Cummings-Edwards with staff from the Supreme Court of Guyana

The bank had partnered with the High Commission in November for the 16 Days of Activism Campaign and its management decided to use the lawns of their head office to erect an IWD sign where members of the public were able to write barriers that they wanted to challenge in support of gender equality. The High Commission was pleased to be involved in the launch of the sign. 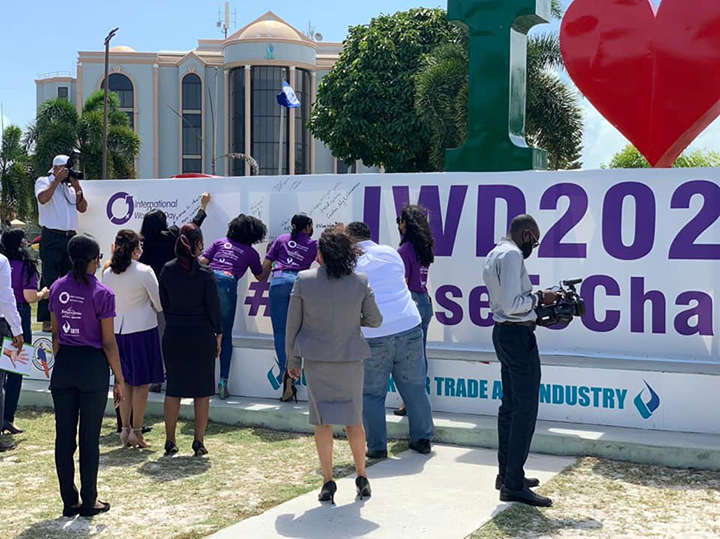 Other activities organised by the High Commission included a virtual panel discussion themed “Migrant Women, COVID‑19 and Gender Based Violence”, that featured Head of Development Cooperation at the High Commission, Ms. Janine Cocker, UNICEF Area Representative – Guyana and Suriname, Nicolas Pron, and Hebrew Immigrant Aid Society (HIAS) Country Director, Alex Theran. The panel was moderated by President of the Guyana Press Association, Ms. Nazima Raghubir and it was a very informative discussion that highlighted agencies that provide support to women and ways that women can seek help. 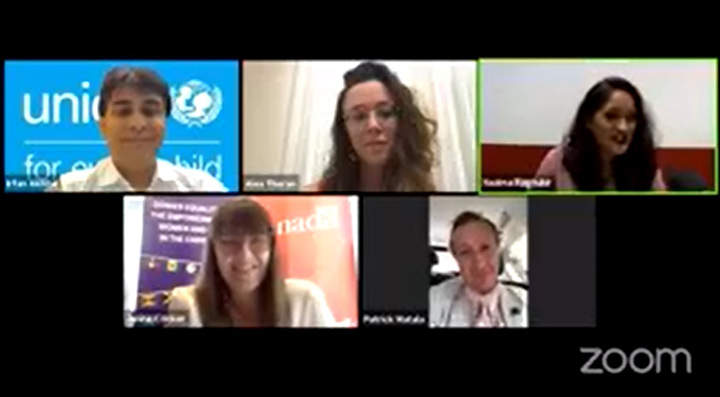 Participants of the ‘Migrant Women, COVID-19 and Gender Based Violence’ panel discussion

The High Commission also participated in the Ministry of Human Service and Social Security’s ‘WE LIFT’ Exhibition which provided an opportunity for women in business to promote their products or services. The President and Members of the Parliament participated in this exhibit, and Canada hosted a booth where Canada’s role in advancing gender equality was demonstrated.

The High Commission was pleased with the level of engagement of its partners and the support shown for the #ChoosetoChallenge campaign. 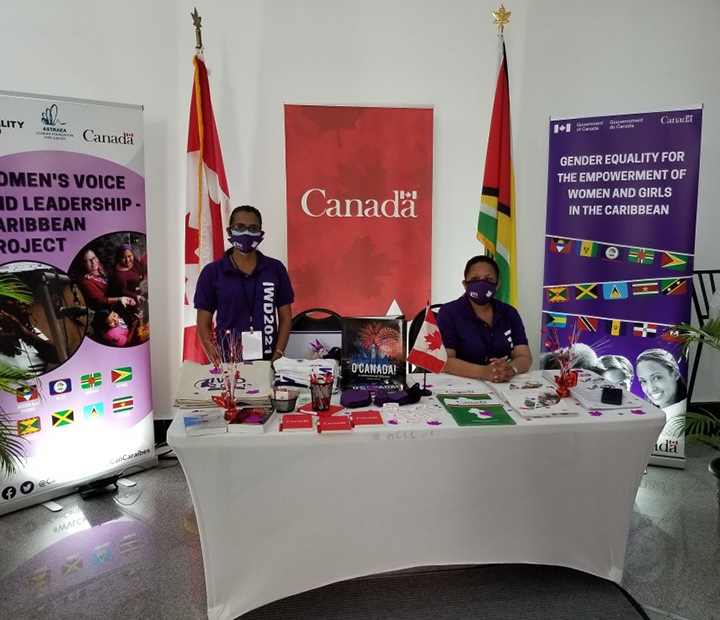 The High Commission’s booth at the ‘WE LIFT’ exhibition

The heads of mission that participated in the photo challenge were: