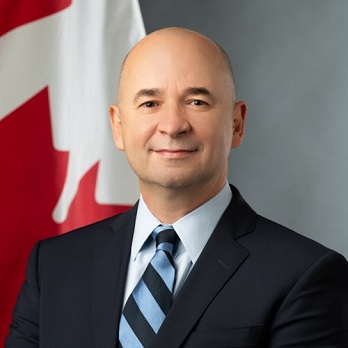 Mr. Dumas (BA [Translation], Laval University, 1986; MSc [Management], Boston University, 1999; MSt [Ethics] University of Oxford, 2023) started his career with the Government of Canada in 1990 in Moscow and then held positions in Cairo and Tel Aviv. Upon returning to Canada, Mr. Dumas occupied the position of Program and Policy Advisor to the Assistant Deputy Minister of Operations at Citizenship and Immigration Canada. He also worked in key positions at the Canada Border Services Agency. He returned overseas in 2007 as Immigration Program Manager in Singapore and then became the Immigration Program Manager in Beijing. In 2013, he returned to Canada, where he been asked to initiate a major centralization project of visa processing. Mr. Dumas then served as Director General of Immigration, Refugees and Citizenship Canada’s (IRCC’s) Domestic Network. Most recently, he served as Director General of Transformation at IRCC.