Wendy Drukier, Ambassador of Canada to Spain and Andorra 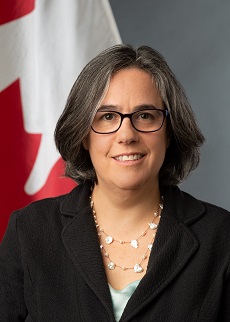 Wendy Drukier is Ambassador to the Kingdom of Spain and the Principality of Andorra since December 2020.

She holds a B.A. with honours in Politics and Economics from Queen’s University (1990) and a Master’s Degree from the Norman Paterson School of International Affairs, Carleton University (1994).

She joined the Department of Foreign Affairs and International Trade in 1997. Her first posting abroad was at the Embassy of Buenos Aires (1999 to 2002). She then served as Political Counsellor in Bogotá (2007 to 2009) and at Canada’s Permanent Mission to the Organization of American States in Washington, D.C. (2010 to 2012), where she was also Director of the Department’s Hemispheric Affairs Division.

From 2012 to 2015, she served as Ambassador to Costa Rica, Honduras and Nicaragua. Afterwards, she held a number of positions in Canada at the headquarters of the Ministry, such as Deputy Director for the Stabilization and Reconstruction Programs Division and Director General of International Organizations. Most recently, she has served as Director General for Economic Development.