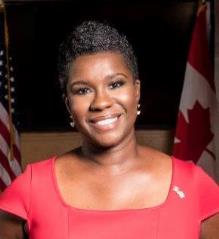 My first year as Canada’s representative in the Southeastern United States has been exhilarating!

One of the key roles of the Consulate General of Canada in Atlanta is to serve and protect Canadian citizens across the six states of our territory: Alabama, Georgia, Mississippi, North Carolina, South Carolina and Tennessee. In this regard, we typically assist people with emergency travel documents or other consular aid.

Sometimes, during natural disasters, for example, our office reaches out to Canadian nationals in the region to ensure their well-being.  This was the case during the week when I assumed this post in September 2017, during Hurricane Irma. One year later, almost to the day, Hurricane Florence demanded similar attention.

Canadian businesses such as Pure Flavor, Irving Consumer Products and Bombardier continue to blossom in this region, while American brands including Chick-fil-A, Coca-Cola and UPS are expanding their reach in Canada. They typify the shared achievements in bilateral trade and investment, and people-to-people, government-to-government ties, which create good, middle-class jobs in our countries and make us all shine.

I continue to traverse the six states in our territory speaking at various events and connecting with state leaders, executives and many wonderful, everyday people. I’m particularly interested in the youth of the Southeast who continue to inspire me with their strong vision, community-mindedness and global outlook.  My goals are to burnish our strong and extensive links and to deliver these unassailable truths: Canada and the U.S. are each other’s best customers and closest allies, depending on each other for their mutual prosperity and security.

My endeavours are facilitated by an adept and diverse staff of Canadians and Americans who exemplify the successfully collaborative relationship of our countries.

NAFTA has been a significant piece of the narrative and we’ve had additional support in spreading the word, with key visits by Minister of Agriculture, Lawrence MacAulay, Minister of Science and Sport, Kirsty Duncan and Parliamentary Secretary, Andrew Leslie. They underscored our desire to build on the $50 billion in bilateral trade and more than 1 million jobs tied to trade and investment with Canada.

Another of our critical imperatives is the promotion of Canadian values and culture. In the last year, we participated in Atlanta Pride for the first time; staged a celebration of Canada’s 150th birthday;  lauded Canadian singer-songwriter k.d. lang as she accepted the Americana Trailblazer Award in Nashville; worked with Canadian disability advocate, Cara Yar Khan; partnered with the City of Atlanta to light up City Hall for Canada Day; and welcomed numerous Canadian talents such as singer-pianist Laila Biali, actor Kawa Ada (for our screening of The Breadwinner) and rapper Thrillah Kane to warm receptions.

I will continue to be a visible and vocal advocate in celebrating how far we’ve all come together and advancing Canada’s enduring friendships and dynamic economic relationships across the U.S Southeast.

Outside of my role as Consul General, I have a passion for community service, especially around youth education and literacy. I am thankful that Atlanta – and cities across the Southeast – have welcomed my interest and involvement. Over the next year, I plan to keep volunteering with Atlanta’s Everybody Wins!, Habitat for Humanity and others. I will also continue to enjoy, explore and appreciate the region’s rich history, fabulous culture, outstanding cuisine and all-encompassing sports habits (I’m on the waitlist for Atlanta United season tickets – fingers crossed!).

Nadia Theodore joined the Canadian civil service in 2000. She has made her career in the Trade Agreement and Negotiations Branch of Global Affairs, holding leadership positions on several recent and major trade initiatives of Global Affairs Canada, including serving as one of the two Deputy Chief Negotiators for the Comprehensive and Progressive Agreement for Trans-Pacific Partnership and as the Executive Director of Canada’s Secretariat for the Canada-European Union Comprehensive Economic and Trade Agreement.

Consul General Theodore previously served at Canada's Permanent Mission to the World Trade Organization and at Canada's Permanent Mission to the United Nations, in Geneva Switzerland. Directly prior to being named Consul General for the US Southeast, in August 2017, she served in Ottawa as Chief of Staff and Executive Director to Canada’s Deputy Minister for International Trade.

Ms. Theodore was born and raised in Ottawa, Ontario. She holds a Bachelor of Laws from the University of London and an M.A. in Political Science from Carleton University.