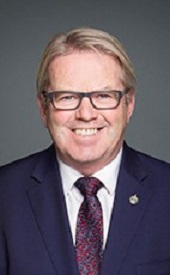 Rodger Trueman Cuzner was first elected to the House of Commons in November 2000 as the Member of Parliament for Bras d’or Cape Breton. He was re-elected in five subsequent elections before his recent retirement in October 2019.

In his early years in parliament, Rodger focused on matters surrounding both Veteran Affairs and Fisheries and Oceans. More recently, much of his attention was directed toward Workforce Development and National Labour issues.

As an elected official representing the beautiful and iconic Northern Nova Scotia and Cape Breton Island, he worked with community and industry to build and mature the tourism sector. Major investments in infrastructure contributed to this growth, notably two of the top-rated golf courses in the world, Cabot Links and Cabot Cliffs.

Prior to this appointment, Rodger worked in the private sector as Senior Advisor at Rubicon Strategies in Ottawa.

A graduate of St. Francis Xavier University, Rodger grew up in Glace Bay, Nova Scotia. He is married to Lynn (nee Hopkins) and they currently live along the Mira River in Cape Breton. They have 3 sons: Mitch, Scott, Brad.