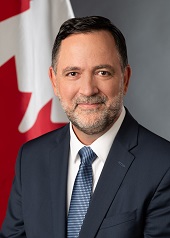 It is a genuine honour to serve as Canada’s Consul General in Denver and represent Canada in the beautiful U.S. Mountain West!

The Canada-U.S. partnership is forged by shared geography, similar values, deep connections and powerful, multi-layered economic ties. Canada boasts strong, unique relationships with each of the 50 states, and our five-state region is no exception. From our shared border in Montana to the great Salt Lakes in Utah; from the peaks of the majestic Rockies in Colorado and Wyoming and across the rolling plains in Kansas, Canada is proud to be the region’s largest international trading partner, most important ally and closest of friends.

Canada and the U.S. trade over $880 billion in goods and services each year; that means $2.4 billion cross our shared border every day. We share an integrated supply chain, efficient energy markets, and a dynamic culture of innovation.

So what does this mean in practical terms? Well, first, it means jobs. A 2015 report states that more than 9 million U.S. jobs depend on trade with Canada. In our five-state region alone, the same report estimates that nearly $17 billion in trade with Canada supported 343,900 U.S. jobs.

Our unprecedented coordination securing North America and defending our borders is well-entrenched and highly successful. Nowhere is this more evident than at NORAD—a bi-national Canada-U.S. military command located in Colorado Springs, Colorado—where, for more than 50 years, U.S. and Canadian military members have worked side by side to secure and protect our two vast countries.  Canada and the U.S. are also founding members of NATO, and collaborate in a wide range of public security initiatives to protect our populations and the movement of people and goods across our highly secure shared border.

We are also partners in protecting the environment. Looking around this region and the splendor of the U.S. Mountain West—the incredible national parks, pristine lakes and vast forests—one can easily understand the importance of environmental stewardship and recognize our shared responsibility to ensure future generations can enjoy these lands as we do.

I'm proud to lead a team that works hard to grow the robust connections we share, including building two-way business, tourism and academic relationships, engaging local decision-makers and citizens on issues of mutual interest, and helping Canadians living and travelling in our region. Please contact us if you have any question or would like more information on how we can work together.

Stéphane Lessard joined Global Affairs Canada at the Consulate General of Canada in August 2016. As Canada's Consul General in Denver, Stéphane oversees a team of 17 people who work within Colorado, Kansas, Montana, Utah and Wyoming to strengthen trade and economic ties; enhance political, academic and cultural links; and assist Canadians visiting or living in the five-state U.S. Mountain West region.

Stéphane began his career practicing commercial law in Montréal before joining the Canadian Federal Government in 1993, where he has held numerous senior and executive positions. Prior to arriving in Denver, Stéphane spent the last ten years with Health Canada (2006 to 2016), where he served in different executive positions across the Offices of the Chief Scientist, the Strategic Policy Branch, the Healthy Environments and Consumer Safety Branch, and the Pest Management Regulatory Agency. He has also worked with the Canadian Space Agency (1993 to 2004), where, as the Head of International Affairs, he oversaw relationships with foreign national and multinational space agencies; and with Global Affairs Canada’s Global Partnership Program (2004 to 2006), where he focused on preventing the spread of weapons of mass destruction.

A native of Montréal, Canada, Stéphane and his wife, Raji Bansal, have three children: Jasmine, Lana and Benjamin.