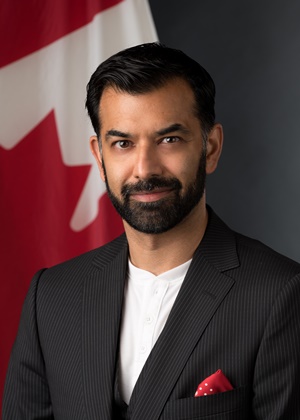 I am extremely honoured to be the Consul General of Canada in Los Angeles, and to be leading a dedicated team that promotes trade and investment, provides consular services to Canadians in need, and encourages close cooperation between Canada and the United States within our region of Southern California, Arizona and Nevada.

No two countries have a deeper, more beneficial relationship than Canada and the U.S. – in business; security and defence; and academic, cultural and environmental interests. Our partnership is forged by shared geography, similar values, common interests, deep connections and powerful, multi-layered economic ties.

Every day, nearly $2 billion in goods and services cross our shared border in a perfectly balanced trade relationship. Overall, Canada-U.S. trade supports 9 million jobs in the U.S. – including 1.4 million in this region alone.

Our Consulate General in Los Angeles, our Consulate in San Diego and our Honorary Consul in Arizona are dedicated to building upon our successful partnership, expanding our shared prosperity and working together on the issues that unite our countries – and we look forward to doing so with our partners and friends across this region.

Zaib Shaikh began his mandate as Consul General of Canada in Los Angeles in December 2018. He is the Government of Canada’s senior representative in Southern California, Arizona and Nevada.

He comes to the posting after an extensive career in the media and entertainment industries, having worked as an actor and producer in theatre, film and television. His work includes acting roles in Deepa Mehta’s film Midnight’s Children, as well as starring in the CBC comedy series Little Mosque on the Prairie, which has been seen in more than 80 countries. Mr. Shaikh co‐produced the special Long Story Short: CBC Turns 75 and co‐wrote, directed and co‐produced the film Othello: The Tragedy of the Moor. He also co-founded and served as an artistic producer of the Whistler Theatre Project in British Columbia.

From 2014 until his appointment in 2018, Mr. Shaikh was the Film Commissioner and Director of Entertainment Industries for the City of Toronto. In that role, he oversaw and grew the city’s screen, music, live festival, sporting event and tourism sectors, helping to double the value of film production in Canada’s largest city, which surpassed $2 billion in 2016.

Mr. Shaikh has served as a board member for the Institute for Canadian Citizenship, the Canadian Centre for Diversity and Inclusion and, most recently on the board of AFC (formerly the Actors Fund of Canada). He has served on juries and committees for the Gemini Awards, ACTRA Awards, Ontario Arts Council, and Theatre Ontario Youth Program as well as an ambassador for the Centre for Addiction and Mental Health and for Amnesty International Canada.

Mr. Shaikh is married to Ms. Kirstine Stewart. They have two children.