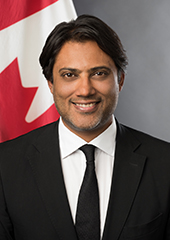 Mr. Rana Sarkar was appointed as Consul General of Canada in San Francisco | Silicon Valley in 2017, with accreditation for Northern California and Hawaii. He is also a member of Canada’s NAFTA Advisory Council.

Mr. Sarkar previously served as National Director for High Growth Markets at KPMG Canada, and co-chairman of the advisory board at the Munk School of Global Affairs at the University of Toronto. From 2009 - 2013, he was President and Chief Executive Officer of the Canada-India Business Council.

In 2005, Mr. Sarkar co-founded Content Partners, a global content agency (sold in 2009), and, in 2001, the advisory firm Rawlings Atlantic Limited. He began his career as a consultant at Roland Berger Strategy Consultants in London and Munich and helped establish Roland Berger in India. He also served as a visiting lecturer at the London School of Economics and the CASS Business School at the University of London.

He attended the London School of Economics, Queen’s University at Kingston, Ontario, and the INSEAD Executive Program in France. He is a member of the advisory council of the Mowat Centre for Policy Innovation, Canada2020, and The Literary Review of Canada and a Distinguished Fellow at the Munk School of Global Affairs, University of Toronto. Mr. Sarkar is married to lawyer and author Reva Seth.  They live in San Francisco with their three children and oversized labradoodle.