Canada and the Organization of American States

The Organization of American States (OAS) is the premier multilateral organization of the Americas. It seeks to achieve among its member states an order of peace and justice, promote their solidarity, strengthen their collaboration and to defend their sovereignty, territorial integrity and independence. After 28 years as an observer, Canada became a member of the OAS on January 8, 1990.

Overview of the OAS

Founded in 1948, the Organization of American States is the oldest regional organization in the world. It is built on four pillars: democracy, human rights, security and development.

The Organization of American States offers opportunities for study and international experience.

About the Permanent Mission of Canada

Canada is represented at the OAS by the Permanent Mission of Canada to the Organization of American States. The Mission is the primary channel of communication between Canada, the OAS General Secretariat and the other member states.

Hugh Adsett is the Ambassador and Permanent Representative of Canada to the Organization of American States.

The Permanent Mission of Canada to the OAS is located within the Embassy of Canada in Washington, D.C.

Overview of the Organization of American States

Founded in 1948, the Organization of American States (OAS) is the oldest regional organization in the world. It was built upon the Pan-American Union to promote peaceful relations in the Americas. With 34 active member states, the OAS is the premier political multilateral forum of the hemisphere. The OAS has also granted permanent observer status to 70 states and the European Union. It is the only regional organization that includes North, Central and South America and the Caribbean.

The OAS is built on four pillars: democracy, human rights, security and development. These core values underlie the organization’s work in safeguarding peace and stability. They are also among the OAS’s areas of greatest expertise. OAS headquarters are located in Washington, D.C., and the organization has national offices in its member states. Member states are represented by their permanent representatives, who meet regularly to analyze hemispheric issues, have dialogues and take collective action as necessary.

The General Assembly is the principal body of the OAS. It gathers ministers of foreign affairs of all member states on an annual basis and also holds special sessions to consider urgent matters. OAS member states generally take decisions by consensus.

The General Assembly provides the forum where major decisions are made concerning OAS policies and actions.

Structure of the OAS

The Permanent Council, as a main governing body of the OAS, meets regularly to set broad priorities for the organization and direct its ongoing actions. It is composed of one Permanent Representative per member state, who is accredited with the rank of ambassador.

The Inter-American Council for Integral Development

The Inter-American Council for Integral Development (CIDI) is a body of the OAS directly answerable to the General Assembly. It has decision-making power in matters of partnership for integral development. The purpose of the CIDI is to promote cooperation among its Member States to help eliminate extreme poverty.

Summit of the Americas

The leaders of the hemisphere meet approximately every three years at the Summit of the Americas. This Summit plays a key role in setting the priorities of the inter-American system and, more broadly, in fostering discussions at the highest level on issues of common interest for the region. The OAS serves as the technical secretariat and institutional memory of the summit process.

Since the first summit in 1994, leaders have met on seven occasions to discuss their shared vision as well as to address the political, economic and social development challenges and opportunities in the hemisphere. The United States of America will host the IX Summit of the Americas from June 6 to 10, 2022, in Los Angeles under the theme “Building a Sustainable, Resilient, and Equitable Future.” Commitments by leaders at the Summit provide guidance for future action by inter-American institutions, chief among which is the OAS.

Canada reports on its progress in implementing commitments made at the summits. Please see reports submitted by Canada and other member states.

Summits provide an opportunity for an exchange between leaders and civil society organizations, private sector and youth from across the region. It is a highly valued platform for Canada to engage with countries of the hemisphere and to advance our foreign policy, trade and development priorities in the region.

For more information, see Summits of the Americas Secretariat.

Canada’s strongest engagement at the OAS is in the areas of democracy, human rights and security. Our specific priorities at the OAS are to:

A number of Canada’s efforts touch all three of these priorities. Canada’s cross-cutting thematic areas are institutional strengthening, human rights, gender issues and indigenous populations, security and public safety, and alignment with the 2030 Sustainable Development Goals.

Since joining the OAS in 1990, Canada has made significant contributions to the OAS’s collective achievements, including through the establishment of the Inter-American Democratic Charter, the adoption of the Social Charter of the Americas, and the elaboration of a Declaration on Security in the Americas. To ensure that the OAS plays an effective role in the hemisphere, Canada has promoted institutional reform. Canada is also working with the OAS to foster both sustainable development and growth with equity.

Through its diplomatic engagement and financial support, Canada has contributed to policy development and the implementation of projects in areas of key Canadian interest that complement and leverage the impact of Canada’s bilateral interventions in the region.

The Organization of American States (OAS) offers opportunities for study and international experience.

Internships at the OAS

The OAS offers youth a unique opportunity to acquire experience in different areas of expertise in an international and multicultural environment enhancing their networking possibilities. In addition, they will have the chance to acquire significant knowledge of the OAS and its mission, pillars, structure and projects in the hemisphere. For more information, see the OAS internship program.

The Model OAS for students of the hemisphere is a program of the OAS designed to promote democratic values among the youth by familiarizing students, faculty and academic institutions of the Americas with the work of the OAS and its Member States, as well as with the organization’s role as the premier political forum in the hemisphere. For more information, see the Model OAS General Assembly.

About the Permanent Mission of Canada

Canada is represented at the OAS by the Permanent Mission of Canada to the Organization of American States. The Mission is the primary channel of communication between Canada, the OAS General Secretariat and the other member states. The role of the Mission is to advance the Canadian government’s objectives and interests through the OAS and to work with hemispheric partners through the organization.

The Mission also represents the Canadian government at the Pan American Health Organization. 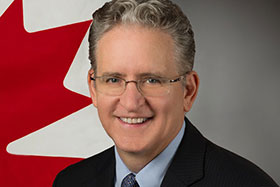 Although Canada remains a relatively new addition to the OAS when compared with many of its founding and other members, we are proud of what we have achieved as Canadians at the Organization, working in partnership with our many friends across the region over the past three decades. There remains, of course, much more to be done. The OAS has a critically important role to play as the premier forum for regional debate, discussion and cooperation among all of our countries in the Americas. The most important challenges we face as countries and as a region cannot be solved alone, and this is true across all four pillars of the OAS’ work on democracy, human rights, multidimensional security and sustainable development. It is only by working together that we will continue to build the more peaceful, just and equitable hemisphere that we all seek.

Canada will continue to be a champion of diversity and inclusion, and of the rights of marginalized populations, including the 2SLGBTQI+ and indigenous communities. We will continue to fight for gender equality, encouraging the active participation, leadership and empowerment of women and girls. And we will work hard to promote and protect democracy and human rights wherever they are threatened.

All of us at Canada’s Permanent Mission to the Organization of American States are very proud to make our contribution to these goals and to be a part of this important institution and its work.

You can write to us at PRMOASG@international.gc.ca

We’d love to hear from you.

Hugh Adsett
Ambassador and Permanent Representative of Canada to the Organization of American States.

The Permanent Mission of Canada to the OAS is located within the Embassy of Canada in Washington, D.C.