The Organization for Security and Co-operation in Europe is a security organization that works on early warning, conflict prevention, crisis management and post-conflict rehabilitation in the European and Eurasian region. Spanning a vast geographic area from Vancouver to Vladivostok, the OSCE is the world’s largest regional security organization under Chapter VIII of the Charter of the United Nations.

Overview of the OSCE

The OSCE is the world’s largest security-oriented intergovernmental organization. Its mandate includes issues such as arms control, promotion of human rights, freedom of the press and fair elections. It has its origins in the 1975 Conference on Security and Co-operation in Europe held in Helsinki, Finland.

Canada’s priorities at the OSCE

The work of the OSCE aligns well with Canada’s foreign policy priorities: to support human rights and fundamental freedoms; to assist fragile states and regions; to support democracy building and the rule of law; and to strengthen regional capacities in conflict prevention, sustainable development and good governance.

About Canada’s Delegation to the OSCE

Canada maintains a permanent delegation to the OSCE in Vienna, Austria. The delegation works to maintain political dialogue across the Euro-Atlantic region and actively contributes to the implementation of Canadian foreign policy on security, human rights and democratic development.

Jocelyn Kinnear is the Ambassador and Permanent Representative of Canada to the Organization for Security and Co-operation in Europe.

The delegation of Canada to the OSCE is located within the Embassy of Canada in Vienna, Austria.

Overview of the OSCE

With 57 participating states in North America, Europe, and Asia, the OSCE is the world’s largest regional security organization under Chapter VIII of the Charter of the United Nations. The OSCE aims to foster stability, peace and democracy for more than a billion people through political dialogue about shared values, as well as through practical security cooperation in the Euro-Atlantic and Eurasian region.

As a forum for political dialogue, a wide range of security issues are discussed at the OSCE and it provides a platform for joint action to improve the lives of individuals and communities. The organization uses a comprehensive approach to security that encompasses the politico-military, economic and environmental, and human dimensions. Through this approach, and with consensus-based decision making, the OSCE seeks to find ways to bridge differences and build trust between states by cooperating on conflict prevention, crisis management and post-conflict rehabilitation.

With its institutions, expert units and network of field operations, the OSCE addresses a range of diverse issues that have an impact on our common security, including arms control, terrorism, good governance, energy security, human trafficking, democratization, media freedom and national minorities.

The Permanent Council is the principal decision-making body for regular political consultations and for governing the day-to-day operational work of the OSCE between the meetings of the Ministerial Council. It implements, within its jurisdiction, tasks defined and decisions taken by OSCE summits and the Ministerial Council. It is the site of weekly plenary meetings at which participating states hold political consultations and may raise any current issue for discussion. Decisions are taken by consensus in this and all OSCE bodies, and become politically binding for all participating states once adopted.

The Forum for Security Cooperation is the OSCE decision-making body in the politico-military sphere. The forum works to increase security and stability in Europe and covers some of the most fundamental politico-military agreements of OSCE participating states, such as the Treaty on Open Skies, the Vienna Document, and the Treaty on Conventional Armed Forces in Europe. The forum helps implement landmark confidence and security-building measures to regulate the exchange of military information and mutual verification between states, as well as the Code of Conduct on Politico Aspects of Security, a key document ensuring the democratic control of security forces. The forum also develops norms and provides practical assistance to address the proliferation of illicit small arms and light weapons; deals with non-proliferation of weapons of mass destruction; and oversees the regular contact, cooperation, and sharing of military information among participating states.

The Ministerial Council is composed of the ministers of foreign affairs of OSCE participating states and is the central decision-making and governing body of the organization.

Canada’s priorities at the OSCE

As the sixth-largest financial contributor to the OSCE, Canada is one of the major supporters of the OSCE in terms of assessed contributions as well as extra-budgetary funding, its programs, and its field operations. Members of Canada’s House of Commons and Senate also actively engage in the work of the Copenhagen-based Parliamentary Assembly of the OSCE.
Return to top

About Canada’s Delegation to the OSCE

Canada is represented by a delegation to the OSCE in Vienna, Austria. This delegation participates in formal and informal OSCE meetings, including the weekly meetings of the OSCE’s Permanent Council and Forum for Security Co-operation. The delegation advances Canadian government objectives and foreign policy priorities security, human rights and democratic development within the organization and engages in political and security dialogue with the other OSCE participating states.

The Ambassador of Canada to the OSCE is supported by a team of diplomats, a military advisor, and delegates who represent Canada across the OSCE’s three dimensions: first dimension (politico-military),  second dimension (economic and environmental) and third dimension (human), as well as on issues ranging from active and protracted conflicts, the OSCE budget and functioning of OSCE field missions.
Return to top 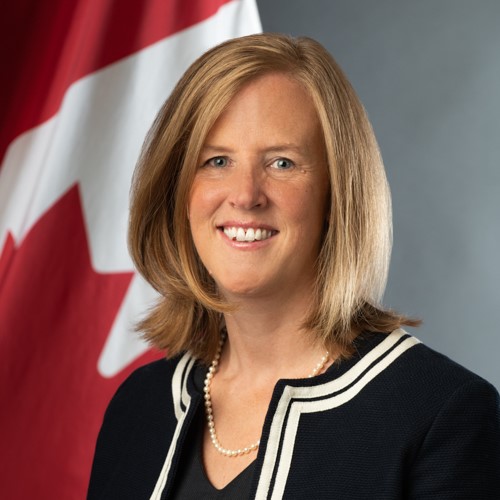 Welcome to Canada’s permanent delegation to the OSCE. I am truly honoured to represent Canada alongside 56 other OSCE participating states in a forum whose mandate is to enhance the security of all peoples in the OSCE region – “from Vancouver to Vladivostok” – through its comprehensive approach to peace, security, prosperity, environmental protection, democracy and human rights.

From its inception as the Conference on Security and Co-operation in Europe (CSCE) in 1975, Canada has been a key participant in the development of the organization, and remains its sixth-largest contributor. During the Cold War, the CSCE became a central forum for regional peace and stability by linking Eastern and Western Europe, North America and the Soviet Union through dialogue on security cooperation. Its transformation into the OSCE in the early 1990s brought about important joint commitments on democracy and human rights, and established a framework for more methodical work on military confidence building and conventional arms control. At that time, Canada was also very involved in the creation of three key autonomous institutions of the OSCE: the Office for Democratic Institutions and Human Rights, the High Commissioner on National Minorities, and the Representative on Freedom of the Media. These institutions have been critical to helping OSCE participating states find the means to implement their commitments to uphold the principles enshrined in the Helsinki Final Act and in decisions taken since.

Today, the OSCE continues to play a central role in the rules-based international order, promoting Canadian values such as democracy, human rights, the rule of law, good governance, anti-corruption and strength through diversity in the Euro-Atlantic and Eurasian regions. By pursuing its unparalleled comprehensive approach to security on three dimensions (politico-military, economic and environmental, human), the OSCE enables conflict prevention and capacity building, objectives that are furthered by the OSCE’s network of field missions and the Parliamentary Assembly of the OSCE.

Our Delegation to the OSCE is proud to advance Canada’s international priorities, including supporting conflict prevention and post-conflict rehabilitation, women’s role in peace and security, border security, combating illicit trafficking and conventional arms control. We work to champion diversity and inclusion in the OSCE region, and to promote gender equality by encouraging the equal and meaningful participation and leadership of women and girls. And we will work hard to protect human rights and democracy wherever they are threatened.

The OSCE is very important to Canada, and our delegation will continue to be a constructive and active partner in its efforts to advance comprehensive security “from Vancouver to Vladivostok.”

All news and statements