The United Nations Educational, Scientific and Cultural Organization (UNESCO) seeks to build peace through international cooperation in education, the sciences and culture. UNESCO's programs contribute to the achievement of the Sustainable Development Goals defined in Agenda 2030, adopted by the UN General Assembly in 2015.

Canada is a founding member of the United Nations Educational, Scientific and Cultural Organization.

The Permanent Delegation of Canada to UNESCO is headed by Ambassador Natasha Power Cayer.

Natasha Power Cayer is the Ambassador and Permanent Delegate of Canada to UNESCO.

Since wars begin in the minds of men and women, it is in the minds of men and women that the defences of peace must be constructed… this vision guides all of UNESCO`s activities since its creation in 1946. As a founding member, Canada was one of the first 20 countries to join UNESCO, an organization that now has 193 member states. According to its constitution, the purpose of UNESCO is “to contribute to peace and security by promoting collaboration among the nations through education, science and culture in order to further universal respect for justice, for the rule of law and for the human rights and fundamental freedoms which are affirmed for the peoples of the world, without distinction of race, sex, language or religion, by the Charter of the United Nations.”

UNESCO, as a specialized agency of the United Nations, addresses global issues through the negotiation of conventions, recommendations, declarations, the production of publications and information campaigns, and through technical cooperation and capacity building in its fields of competence. It is in Canada's interest that this organization, whose mandate is more relevant than ever, promotes Canadian values in a world plagued by armed conflict, various forms of extremism and by climate change.

UNESCO is the only UN agency that includes in its constitution a network of national commissions to support it in its mandate. The Canadian Commission for UNESCO (CCUNESCO) serves as a bridge between Canadians and UNESCO. The CCUNESCO actively promotes UNESCO's values and provides a strong civil-society perspective. The CCUNESCO also supports various projects aimed at creating more inclusive communities, encouraging innovation, and protecting Canada's heritage and biosphere.

Canada is also host country of the UNESCO Institute for Statistics (UIS), an authoritative and reliable source of internationally comparable data on education, science, culture and communication. Based in Montréal, the UIS enjoys functional autonomy. Statistics Canada is a member of its governing board.

Under the leadership of Global Affairs Canada, the Permanent Delegation of Canada to UNESCO is headed by Ambassador Natasha Power Cayer. The delegation works closely with several other departments, as well as with provinces and territories and the CCUNESCO.

In accordance with the 2006 Canada-Quebec Agreement on UNESCO, the Permanent Delegation of Canada to UNESCO includes a representative of the Government of Quebec on its team. Thus, Quebec can, in its fields of competence, complete the Canadian position. In concrete terms, the governments of Canada and Quebec work in concert on all votes, resolutions, negotiations and proposed normative instruments at UNESCO. The Quebec representative participates actively in daily decisions and meetings, and works alongside the rest of the delegation, as well as with officials from other provinces and the Council of Ministers of Education, Canada.

Canada is an elected member of several intergovernmental committees, including: 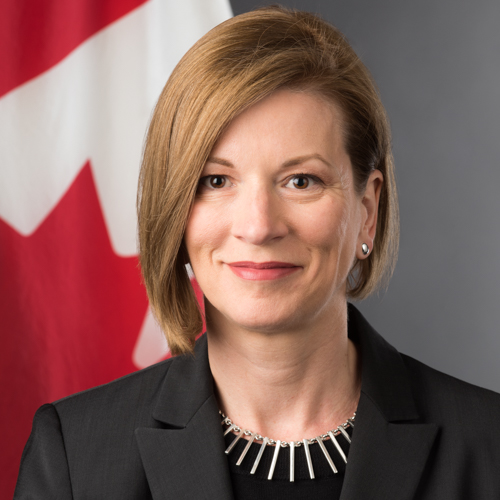 Many thanks for visiting the website of the Permanent Delegation of Canada to UNESCO.

I am truly honoured to represent Canada as Ambassador and Permanent Delegate, at an institution with an impressive history of encouraging successful multilateral cooperation involving experts, civil society, and governments in the pursuit of objectives in the areas of science, culture and education. The Organization can and does have an impact on a broad range of pressing global issues of concern to Canadians, whether it be countering violent extremism, encouraging sustainable development and environmental protection, including combatting climate change, or advancing gender equality and upholding human rights. UNESCO is a fundamental part of the multilateral system, and a forum where countries can, by working together, continue to build a more peaceful, just and equitable world.

At UNESCO, Canada is a champion of diversity and inclusion, and in particular of the rights of marginalized populations, including the LGBTQ2+ and indigenous communities. Our Delegation will continue to work for gender equality, by encouraging the active participation, leadership and empowerment of women and girls. Moreover, we will promote and protect human rights and media freedom wherever they are threatened.

With its notable expertise in all sectors of the UNESCO mandate, Canada makes an active and important contribution to the Organization’s efforts. I am committed to working with Canadians, and in close collaboration with the excellent team at the Canadian Commission for UNESCO, to enhance this contribution over the next four years. I am keen to explore ways to enhance Canada’s rich and positive relationship with UNESCO, with a view to producing concrete, positive results.

The entire team at Canada’s Permanent Delegation to UNESCO are very proud to make our contribution to these goals and to be a part of this important institution and its work.

We would love to hear from you. You can write to us at PESCOG@international.gc.ca or connect with us on twitter @Canada2UNESCO in English, @CanadaUNESCO in French.

Ambassador Cayer is a diplomat with 25 years of professional experience in political affairs, security policy and international cooperation.  Most recently, she served as Ambassador and Permanent Representative to the Organization for Security Co‑operation in Europe, in Vienna, Austria.

She has held successive positions with Canada’s foreign ministry at home and abroad focussed on multilateral issues, including overseas assignments in Brussels at the Joint Delegation of Canada to NATO (2000 to 2003) and on the NATO International Staff (2003 to 2007); in Paris, as Deputy Permanent Delegate and chargé d’affaires a.i. at the Permanent Mission of Canada to UNESCO (2007 to 2011); as Counsellor, Nuclear Affairs at the Permanent Mission to the International Organizations in Vienna (2015-16); and on temporary assignments in New York and Wellington. In Ottawa, Ms. Cayer has served as Senior Advisor to the Assistant Deputy Minister for International Security and Global Issues (1999 to 2000), as Deputy Director for Chemical and Biological Weapons in the Non-proliferation and Disarmament Division (2011-2013), and as Special Advisor to Canada’s Special Operations Forces Command (2013-2015).

Prior to joining the Department of Foreign Affairs and International Trade in 1995, she worked for the Special Joint Committee of the House of Commons and Senate charged with reviewing Canada’s foreign policy in 1994, as well as the Department of Finance, Secretary of State for Multiculturalism and Citizenship, and the Canadian International Development Agency.

Ms. Cayer holds a Bachelor of Social Sciences degree from the University of Ottawa, and a Master of Arts in International Affairs from the Norman Paterson School of International Affairs at Carleton University. She is fluently bilingual in English and French, enjoys music and visual arts, and with her husband, Alexandre Vulic, is the proud parent of two daughters.

Miollis Office Building of UNESCO at: