Women at the table: Peace and security in Côte d’Ivoire

“It is now understood that building sustainable peace is also women’s business. It is up to us to take our place.”

Women and girls play key roles in their communities. In times of conflict, they often promote peace and negotiation between warring parties. Women are critical in addressing the root causes of a conflict, which helps encourage community engagement and more sustainable solutions.

Yet, women are often excluded from formal conflict resolution and decision-making processes.

The Embassy of Canada to Côte d’Ivoire is working to help change that.

The civil conflict that broke out in 2002 divided Ivoirians between North and South.

After the conflict, social cohesion weakened further due to:

The conflict had the most impact on women and girls. They continue to face increased discrimination, and sexual and physical violence.

Women were involved in building peace, but excluded from formal negotiation processes. They remain underrepresented in decision-making positions.

In 2000, the United Nations Security Council (UNSC) unanimously adopted Resolution 1325 (The Resolution). This marked the first time the UNSC recognized the impact of armed conflicts on women and girls.

The Resolution reaffirms the central role of women in conflict prevention, management and resolution.

The action plan is based on four pillars:

Increasing participation of women at all levels of decision-making.

Protecting women and girls from sexual and gender-based violence.

Using a gendered lens to improve relief and recovery efforts, especially in addressing needs of women and girls in refugee camps and settlements.
Côte d’Ivoire was the first African country to adopt a national action plan for the implementation of United Nations Security Council (UNSC) Resolution 1325 (The Resolution) for the period of 2008-2012.

During Canada’s G7 presidency, the foreign ministers of the G7 countries met in Toronto, Canada.

Foreign ministers committed to establish partnerships and provide a partner country with targeted assistance to accelerate the implementation of the women, peace and security initiative:

The Canadian Embassy is working with the Ivorian government and civil society to draft an updated action plan for 2019 to 2023. We are proud to encourage women’s participation in conflict prevention and peacebuilding, while raising awareness of the important role women play in all peace and security efforts. We are proud to stand beside Côte d’Ivoire.

The Canadian Embassy and the Côte d'Ivoire Chapter of the Women's Peace and Security Network in the Economic Community of West African States (ECOWAS) organized a panel discussion on the implementation of The Resolution.

100 attendees from state and sub-regional institutions, development organizations, civil society organizations and the diplomatic community participated in a spirited discussion about the role of civil society in enacting The Resolution.

Panelists and participants emphasized that despite some progress made in each of the four pillars, work remains to make women equal partners in the prevention of conflict, delivery of relief and recovery efforts and in peacebuilding.

Suzanne Annita Traoré, Secretary General of the WANEP–Côte d'Ivoire Board of Directors noted that, “Women continue to be under-represented in decision-making spheres and marginalized in peace negotiation”.

The panel encouraged women to:

"Women from civil society organizations, we have a duty through our activities to pool our efforts and make our voices heard in conflict resolution processes and to participate as an equal partner at all levels of government decision-making in conflict resolution, prevention and sustainable peace."

"It is now understood that building sustainable peace is also women's business.  It is up to us to take our place."

In pursuit of peace: Where are the women?

In Côte d'Ivoire and around the world, women largely remain excluded from conflict resolution and mediation. This inequality persists despite evidence proving the value of women’s participation.

At a film screening of excerpts from "In Pursuit of Peace" by Canadian director Garry Beitel, more than 200 participants considered:

Canadian Ambassador Julie Shouldice opened the event: “Today’s meeting places women at the heart of an issue to which all humanity aspires: that of peace and security and inclusive development.”
Madeleine Oka-Balima, Head of UN Women's Programmes in Côte d'Ivoire and a guest panellist, explained: “Mediation is a tool to be used on a daily basis. It will prevent us from clashes, conflicts and destruction.”

"The film and the exchanges allowed me to see how women's engagement can help move beyond hostilities to building sustainable peace."

Participants left ready to advocate for the inclusion of women in mediation and conflict resolution.

One participant commented: “I learned a lot about Resolution 1325. We, as civil society, commit ourselves to work more for its implementation in Côte d'Ivoire.”

"In Pursuit of Peace" was aired and discussed at the Institut français à Abidjan.

Women, peace and security, even at sea

As part of exercise Obangame Express 2019, the Royal Canadian Navy joined personnel from more than 20 countries to:

This visit was a chance to host a reception on board Her Majesty’s Canadian Ship (HMCS) Kingston about women’s roles and perspectives on peace and security.

guests from non-governmental organizations, civil society, and the Ivorian government were welcomed aboard by:

In an effort to encourage broader engagement, each guest brought a mentee to the event to:

In her address, Canadian Ambassador Shouldice emphasized the importance of feminism and the struggle for gender equality. She called for guests to take action and ensure their organizations are implementing the women, peace and security initiative.

“Lasting peace is only possible when women and girls participate fully in conflict prevention and resolution and other peace and security efforts”.

Guests were inspired by news of the second National Action Plan and Canada’s commitment to women, peace and security efforts in Côte d'Ivoire.

"I am pleased to see that Canada will support Côte d'Ivoire in the development of its second Action Plan for the implementation of Resolution 1325.  We are going to make a qualitative leap”, said Euphrasie Kouassi Yao, former Minister of Women and Special Advisor to the President of the Republic on Gender. Ms. Yao helped develop Côte d'Ivoire's first implementation plan when she was Director of Equality and Gender at the Ministry of Women.

Women are key to lasting peace

As we approach the 20th anniversary of Resolution 1325, Canada remains committed to realizing the women, peace and security agenda.
The Embassy of Canada to Côte d'Ivoire continues to build partnerships and support projects to:

Without women at the table, there is no lasting peace. 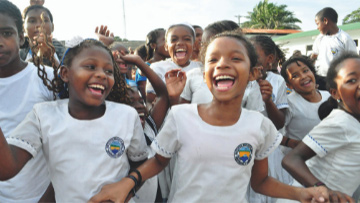