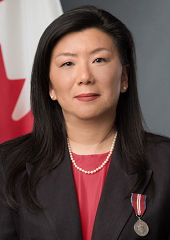 Ms. Mia Yen was appointed as Consul General of Canada in Seattle in 2021, with accreditation for Washington State, Oregon, Idaho and Alaska.

Ms. Yen joined the Department of Foreign Affairs and International Trade as a Foreign Service Officer in 2001. Her headquarters assignments have included serving as Departmental Spokesperson, Adviser to the Deputy Minister of International Trade, Deputy Director in the Office of the Deputy Minister of Foreign Affairs, Deputy Director responsible for South Asia Bilateral Commercial Relations and Senior Policy Adviser to Canada's Chief Trade Commissioner.

In 2009, Ms. Yen was seconded to the Privy Council Office, where she served as Director of Operations of the Afghanistan Task Force and then as Chief of Staff to its Deputy Minister. She has also served as Director General responsible for Canada's Foreign Service Directives.

Overseas, Ms. Yen has served as Legislative Analyst in Washington, D.C., and Trade Commissioner in Kuala Lumpur. In 2012, Ms. Yen began serving in Myanmar, where she was tasked with setting up Canada's new embassy in the country. She was Canada's first-ever resident Chargé d'affaires in that country prior to becoming Senior Trade Commissioner and Head of Mission Administration. From 2018-2021, she served as Consul General in Chandigarh, India.

Ms. Yen was born and raised in Vancouver, British Columbia. She attended Simon Fraser University and the University of Western Ontario, respectively, for her undergraduate and graduate studies.