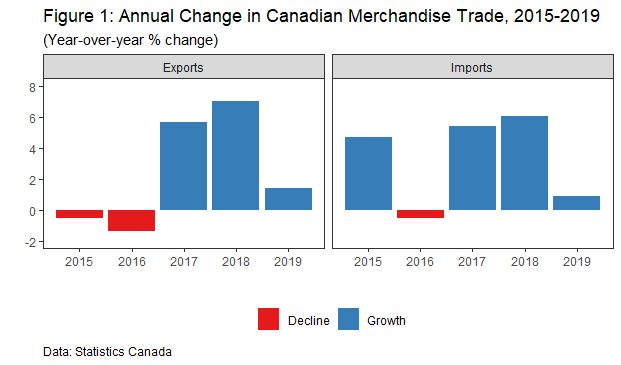 At the sector level, Canada’s top five export sectors all improved compared to 2018. However, in contrast to the two previous years, Canadian exports were driven by a non-energy sector – precious stones and metals. Supported by the second largest annual growth in gold exports on record, precious stones and metals grew by $4.6 billion or 19.2% in 2019, accounting for over half of Canada’s overall export growth.

Energy, Canada’s largest export sector, grew by a moderate 1.1% in 2019, primarily due to increased crude oil exports (+3.7%). This was the third consecutive year of expansion in this sector, largely reflecting increasing export volumes and rebounding crude oil prices. Excluding energy products, Canadian merchandise exports rose 1.5% in 2019. The other three top export sectors, automotive, machinery, and electronics grew by 4.1%, 3.3%, and 3.5%, respectively. Exports of automotive advanced due to armored vehicles, trucks and passenger vehicles, machinery exports grew due to centrifuges, machinery parts, and computers, and exports of electronics were up mainly from electronic integrated circuits. Other expanding export sectors include mineral ores (+$1.5 billion) and aircraft and parts (+$1.2 billion). 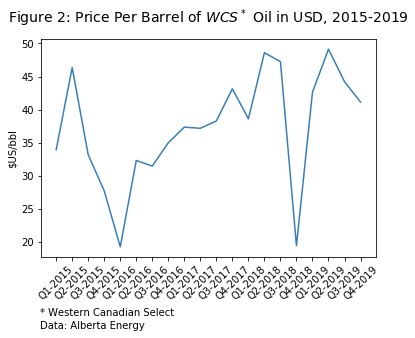 On the import side, three out of the top five sectors posted growth. A large increase in the import of trucks resulted in Canada’s automotive imports growing 1.1% in 2019, to reach $98.8 billion in value. Imports of machinery rose 2.8% due to turbojets and other gas turbines while import of electronics improved marginally. Conversely, imports of energy products decreased 7.3% mostly from lower imports of refined oils and plastics fell 1.4%.

Canada’s merchandise exports to the United States grew faster than its global exports, up 2.1% or $9.0 billion in 2019 to reach $447.0 billion in value. In contrast, Canadian exports to non-U.S. markets declined 0.5% or $0.8 billion to $145.6 billion. Consequently, Canada reversed its trend of trade diversification away from the U.S. in 2019, with the U.S. share of Canadian merchandise exports growing by 0.5 percentage points to 75.4%. 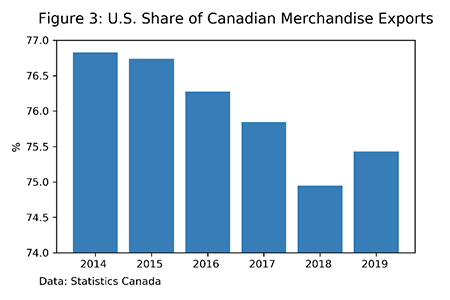 At the same time, Canadian merchandise imports from the United States moved sideways, up 0.1% or $239.5 million in 2019 to $304.8 billion in value, primarily due to higher imports of automotive products and machinery being offset by lower imports of iron and steel, energy products, plastics, and aluminum. As exports to the U.S. outperformed imports, Canada’s merchandise trade surplus with the United States climbed $8.8 billion to $142.1 billion in 2019, the largest since 2008.

The growth in exports to the U.S. was driven by energy products, which rose 3.3% or $3.8 billion, on the back of higher volumes of crude oil exports. Excluding energy products, Canadian merchandise exports to the United States advanced 1.6% in 2019, led by exports of vehicles and parts (mainly trucks and passenger vehicles), which rose 2.8% or $2.0 billion in 2019. Other product sectors such as aircraft and parts (+30.6%) and precious stones and metals (+16.2%, mainly gold) also made significant contributions. On the other hand, tensions surrounding wood, aluminum, and iron and steel products dragged down total growth.

According to data from the United States Census Bureau, the U.S. posted a surge in merchandise imports from Mexico in 2019, up US$12.0 billion or 3.5% (mainly automotive products). As a result, Mexico surpassed China and Canada to become the largest merchandise trading partner for the United States, totaling US$614.5 billion in value, followed closely by Canada (US$612.1 billion) in second place. The U.S.-China trade war lowered both exports to (-11.3%) and imports from (-16.2%) China, resulting in China falling to the third place in 2019 (US$558.9 billion), down from first place the year prior.

Canada’s trade performance with the UK has been dictated by fluctuation in gold tradeFootnote 4 and 2019 was no exception. Following a 15.4% decline in 2018, Canadian gold exports to the UK rose by nearly one-third in 2019 or $3.5 billion in value as both prices and quantities recorded double-digit growth rates. As a result, Canadian merchandise exports to the United Kingdom climbed $3.2 billion or 19.3% in 2019 to $19.8 billion. This represents the largest annual growth for Canadian exports outside the U.S.

Exports to Germany posted the second largest increase in the EU and the third largest increase overall (behind the US and the UK), up $1.5 billion or 30.1% in 2019. Growth was driven by precious stones and metals (+121.5%, mainly metal scraps and coin), aircraft and parts (+99.8%), and mineral ores (+50.5%). On the other hand, exports to Belgium registered the largest decrease in the EU, falling $0.7 billion or 17.7% (mainly diamonds) and exports to Spain fell 30.0% due to energy products and aircraft and parts. Overall, growth in exports was recorded in 14 EU countries and declines were recorded in the other 14.

For the first 12 months CPTPP was in force, Canadian merchandise exports to CPTPP members which have ratified the agreementFootnote 5 declined marginally, down 0.2% in 2019 to reach $17.8 billion, and merchandise imports rose 5.6% to $27.8 billion. Lower exports of wood, aluminum, and oil seeds were mitigated by higher exports of cereals, meat, and machinery. The decline in aluminum and oil seeds can be mainly traced back to Japan, where total exports declined 3.4% in 2019 to $12.5 billion. In contrast, total exports to Singapore and Australia grew 26.8% and 10.1%, respectively. Exports to Singapore were supported by the 28.3% increase in machinery exports and the 95.0% growth in exports of electronics, while exports to Australia grew main due to cereals (+$191.2 million), machinery (+12.2%), electronics (+23.4%), and motor vehicles and parts (+23.3%).

Out of Canada’s other top export markets, Bangladesh, Saudi Arabia, and Turkey recorded the fastest growth and reached new record highs. After three consecutive years of declines, Canadian exports to Bangladesh exploded in 2019, up 91.7% to $1.2 billion. The growth was mainly supported by higher exports of agriculture products - oil seeds (+583.9%), vegetables (+156.2%), and cereals (+52.9%). Because of this spike in exports, Bangladesh improved to become the 25th largest merchandise exports destination for Canada in 2019, up from 37th in 2018. Exports to Saudi Arabia grew for the fourth consecutive year, rising 49.6% to $2.8 billion. Like in the previous years, this growth was supported by exports of armored vehicles. Exports to Turkey improved for the seventh consecutive year, up by 21.7% in 2019 to $1.6 billion, led by aircraft and parts (+309.8%) and cereals (+299.4%). 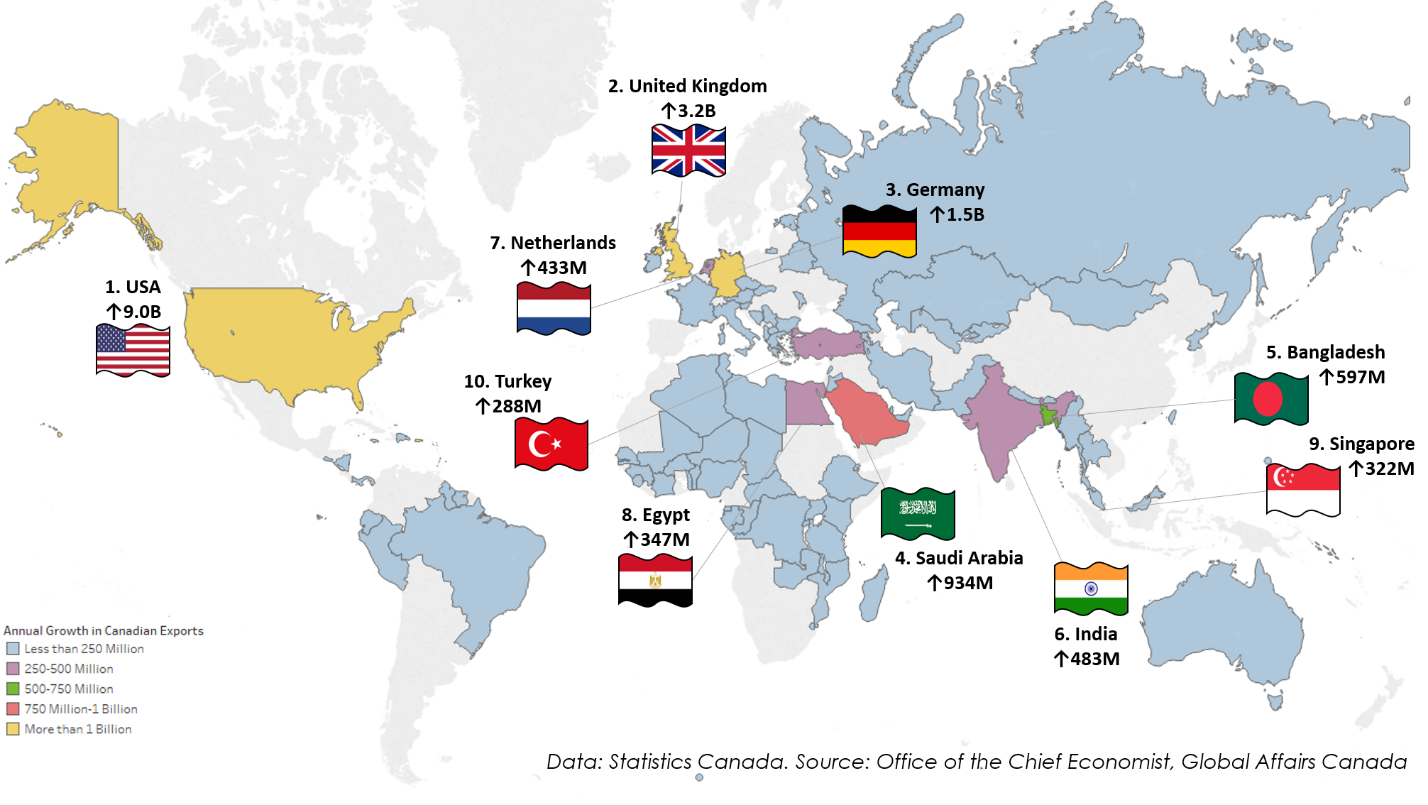 For the full year, declines in Canadian merchandise exports were concentrated in a select few countries. Mainland China, Canada’s second largest export destination, recorded the largest fall in exports by far, down $4.4 billion or 16.0% in 2019 to $23.2 billion in value. This was the first export contraction since 2014, and the fastest one-year fall since 1997.

The fall in exports was primarily due to the Chinese ban on the importation of canola and soybeans from Canada, which led to a 77.6% or $3.7 billion reduction in oil seeds exports compared to the previous year. Furthermore, Canada’s exports of wood pulp and precious stones and metals (mainly gold) fell by 14.6% and 58.2%, respectively. These declines were partially mitigated by higher exports of mineral ores (+41.8%, iron and copper) and vehicles and parts (+16.2%). Meat products were another source of contention as meat exports to China had a solid start in the first half of 2019 but fell sharply from July to November before rebounding in December. For the full year, meat exports to China rose by 17.6%. 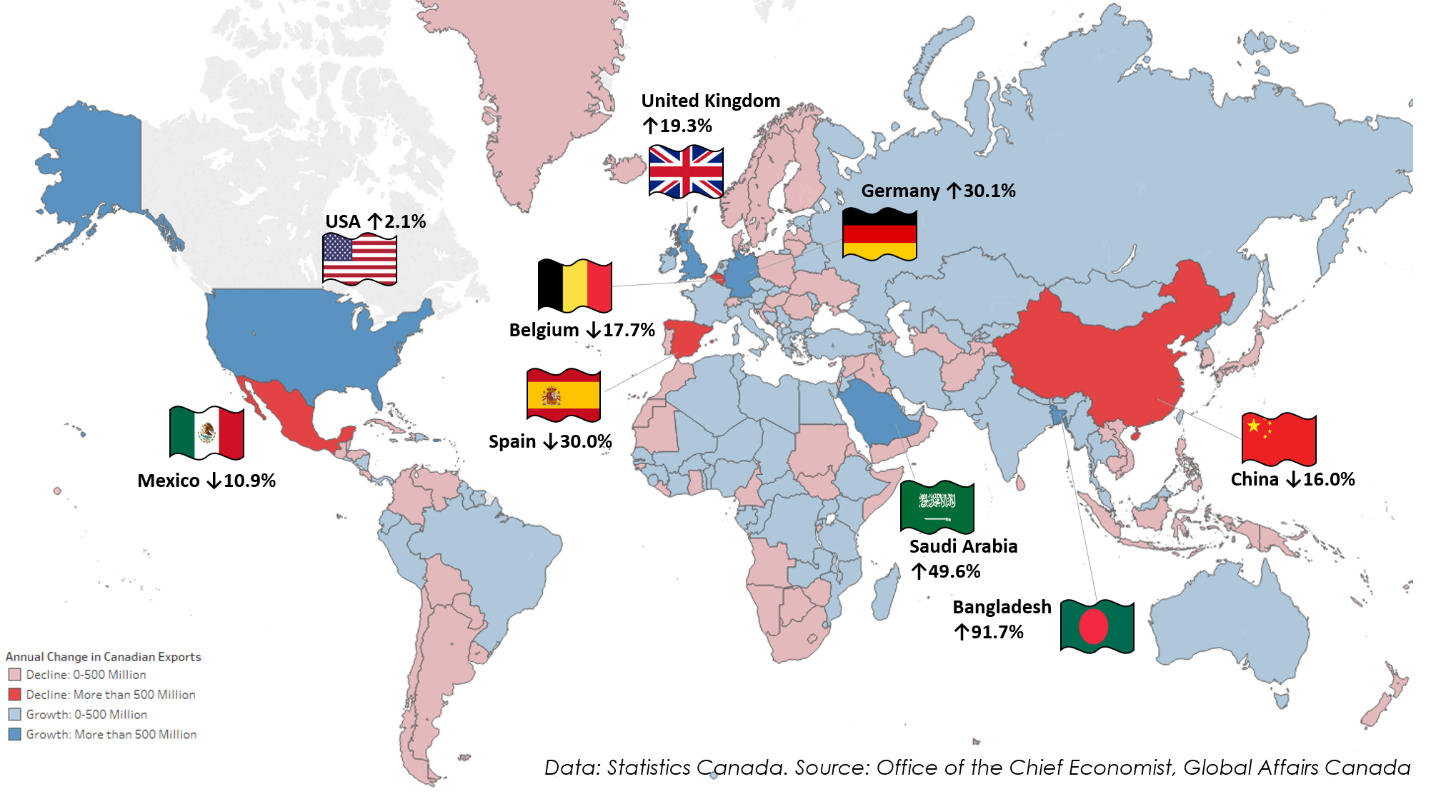 Over the Last Three Years

All data is in Harmonized System (HS) classification and reported on the Customs basis.

HS 7108. Gold is an important export for Canada to the EU but it is volatile in value for reasons not related to CETA.

Gold accounted for over half of Canada’s annual UK destined export value in the last decade.

Ratified partners include: Australia, Japan, New Zealand, Singapore, and Vietnam. Mexico is excluded due to CUSMA.