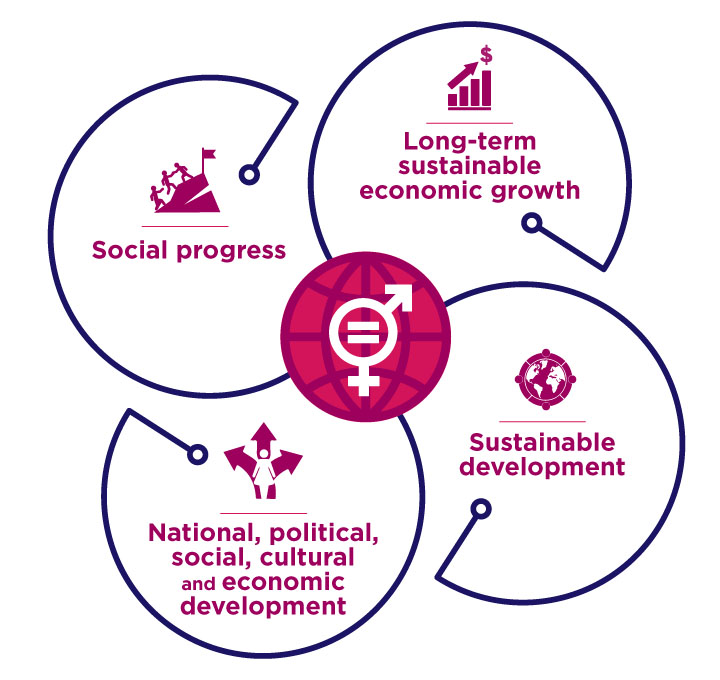 Our commitments to advancing gender equality, the empowerment of women and girls, and the promotion and protection of their human rights.

We are committed to promoting these key Canadian values through:

Advancing gender equality is at the heart of our international assistance. All of our development policies and programs aim to empower women and we implement specific projects to achieve these goals.

Protecting and advancing women’s and girls’ human rights remains a foreign policy priority. These discussions take place with other countries and in multilateral forums.

The Government of Canada empowers women to be equal decision-makers and agents of change in economic, social and political processes. The focus is on:

Progress toward gender equality and empowerment of women and girls in the development agenda requires:

Supporting the rights of women and girls

Through our international development and peace and security initiatives, we support international efforts to enhance the role of women and girls.

We played an important role in advocating for gender equality and empowering women and girls in the 2030 Agenda for Sustainable Development. We work with like-minded partners to implement gender equality within all programs.

Canada was one of the first countries to sign and ratify the Convention on the Elimination of All Forms of Discrimination Against Women (CEDAW). The convention set international standards for eliminating gender discrimination.

We participated in the groundbreaking development of the Vienna Declaration and Programme of Action in 1993. This declaration stated that “women’s rights are human rights”.

It also called for action to integrate the equal status and human rights of women and girls in the mainstream of UN system-wide activities.

The Government of Canada supports resolutions to eliminate violence against women and girls—this includes so-called ‘honour’ crimes, female genital mutilation and other traditional or customary practices that affect the health of women and girls. We were also instrumental in ensuring sexual and gender-based crimes were included in the draft Statute for the International Criminal Court.

The Government of Canada also launched an Action Plan for the implementation of UN Security Council Resolutions on Women, Peace and Security, in October 2010.

The UN World Conferences on Women have been important catalysts to move the agenda forward on gender equality, the empowerment of women and girls and their human rights.

We played a key role at the 1995 Fourth World Conference on Women in Beijing, which resulted in the Beijing Declaration and Platform for Action. The declaration identified 12 critical areas of concern and set out a course of action to ensure the protection and advancement of women’s rights around the world.

The United Nations Commission on the Status of Women (CSW) meets every year to evaluate progress and identify challenges related to gender equality.

Following the adoption of the Beijing Declaration and Platform for Action, the CSW annual meeting has reviewed the Beijing declaration every five years. It reaffirms the international community’s commitment to its full and accelerated implementation. Canada will become a member of this Commission for the 2017–2020 term.

We promote similar efforts in other international platforms such as the:

Women Deliver is a leading global advocate and convener for advancing gender equality, including the sexual and reproductive health and rights of girls and women. The organization is an important partner for Canada, and its unique mandate and approach aligns with Canada’s priorities.

Women Deliver holds a global conference every three years. The Women Deliver 2019 Conference—held in Vancouver in early June—was not just a conference but a movement to promote gender equality worldwide and bring about transformational change. Canada is proud to be a part of this movement.

The theme of the 2019 conference was power: the power of individuals, of political, economic and social structures, of movements and collective action, and how it can drive—or hinder—progress and change.

The conference brought together more than 8,000 people from more than 165 countries and had more than 100,000 virtual participants, including:

Advancing gender equality and the empowerment of women and girls is a top priority for Canada. We believe gender equality must play a key role in creating lasting solutions to global challenges.

In June 2017, Prime Minister Justin Trudeau announced that Canada would host the Women Deliver Conference in Vancouver, June 3 to 6, 2019. Canada also announced a $20‑million commitment to Women Deliver over three years from 2017 to 2020. Our commitment supports the conference and global advocacy work, including the Deliver for Good campaign and the Young Leaders Program.

During Canada’s 2018 G7 presidency, we made history by integrating gender equality and women’s empowerment into all G7 themes, commitments and initiatives. As hosts of Women Deliver 2019, we were able to promote this approach, both in Canada and internationally.

During the conference, we made innovative investments to advance gender equality, both in Canada and internationally. This helps solidify Canada as a leader on women’s rights and gender equality.

On March 4, 2019, the Minister of International Development and Minister for Women and Gender Equality, the Honourable Maryam Monsef, launched a national committee of 16 Canadian influencers committed to gender equality. Their role was to mobilize Canadians on gender equality, diversity and inclusion in the lead-up to the Women Deliver 2019 Conference.

The members represented diverse voices and perspectives on gender equality from across Canada. They participated in their personal capacity.

Members raised awareness about the significance of gender equality through their networks and communities. The members engaged Canadians through their participation in more than 20 activities and events to push for a more equal, more inclusive society. Their efforts were amplified through a range of partnerships, including with Women Deliver 2019 Mobilization Canada, a network of organizations working across the country to advocate for gender equality.

In their final meeting at the 2019 conference, committee members, Women Deliver 2019 Mobilization Canada representatives, and the president and CEO of Women Deliver, Katja Iversen, discussed ways to sustain the momentum toward achieving gender equality in all sectors of society beyond the conference.

Minister Monsef hosted a ministerial forum as part of the Women Deliver 2019 Conference. Over three sessions, the forum brought together:

The participants had an open and honest dialogue on the barriers to gender equality as well as on the key issues affecting the health, rights and well-being of adolescent girls. Ministers made concrete commitments to create a legacy of action to advance the rights of girls, adolescent girls and women around the world.

In September 2018, Canada and the European Union co-hosted the Women Foreign Ministers’ Meeting (WFMM) in Montréal. Together with the European Union, we believe that women’s economic and political empowerment is critical to building a safer, more prosperous, inclusive world.

The meeting was a historic opportunity to advance global peace, security and prosperity by bringing together the world’s women foreign ministers. While in Montréal, they discussed a range of issues, including:

Civil society representatives, who have played a crucial role in shaping this meeting, participated in the ministerial meeting in various capacities.

This initiative built on previous engagements made by the Government of Canada to integrate a gender perspective in foreign and security policy, such as:

We hope that the WFMM will make an important contribution to the global dialogue on the role of women in international affairs.

Women Foreign Ministers from the following countries participated at the meeting:

The Government of Canada adopted the Federal Plan for Gender Equality in 1995 as a response to the Beijing Platform for Action created at the Fourth World Conference on Women (1995). The key commitment of the Federal Plan was to “implement gender-based analysis throughout federal departments and agencies”.