Canada and the United Nations

As a founding member of the United Nations, Canada is committed to the guidance provided in the UN Charter to maintain international peace and security, develop friendly relations among nations, and to achieve international co-operation in solving international problems of an economic, social, cultural or humanitarian character, and in promoting and encouraging respect for human rights.

Canada in the United Nations

The commitment to multilateralism is the cornerstone of Canada’s foreign policy and the United Nations is our most important forum for that commitment.

About Canada's offices to the UN

Learn more about Canada’s Permanent Missions to the United Nations in New York City and Geneva.

Canada's Ambassadors to the UN

Get in touch with Canada’s representatives at the United Nations.

Declarations and statements from previous meetings of the United Nations.

Canada in the United Nations

Commitment to multilateralism is the cornerstone of Canada’s foreign policy. The United Nations is Canada’s preeminent international forum for advancing issues that matter to Canadians and engaging with partners from around the world to meet global challenges. Global security and prosperity can only be achieved by working together towards a common goal: a more just, inclusive and sustainable world.

As Canadians, we are proud of our contributions to the foundation of the United Nations and to the achievement of its many milestones. We are committed to promoting human rights, advancing peace and security, upholding the rule of law, addressing climate change and ensuring sustainable development. Canada’s diplomacy and leadership at the UN give a strong voice to Canadian principles and values on the world stage. By promoting gender equality, environmental stewardship, and respect for diversity and inclusion, we are working toward a more peaceful and prosperous world.

There is no better example of the UN’s consensus-building power than the adoption by all member states of the 2030 Agenda and the Sustainable Development Goals. The 2030 Agenda aims to fight inequality, tackle climate change and build peaceful societies. Canada is committed to working with our partners to support the implementation of the Global Goals for Sustainable Development and ensure that no one is left behind.

Learn more about what Canada is doing at the United Nations to rise to the challenges of this century:

About Canada's offices to the UN

Canada has seven diplomatic missions accredited to the UN:

Canada has five other diplomatic missions accredited to the UN:

The Permanent Mission of Canada delivers on Canada’s multilateral foreign policy priorities at the United Nations Headquarters in New York City. Through diplomacy, negotiation and analysis of UN activities, the Mission works to advance Canada’s interests and strengthen the pillars of the UN: international development, peace and security and human rights.

One of Canada’s key priorities is protecting and enhancing the international rules-based order by championing values of inclusive and accountable governance, including by promoting human rights, women’s empowerment and gender equality and peaceful pluralism.

The Permanent Mission of Canada consists of the following policy sections:

Permanent Mission of Canada to the UN Gender Pledge

Canada is committed to advancing gender equality and the empowerment of women and girls, including the promotion and protection of their human rights. The gender pledge sets out specific commitments and key actions on gender equality for the Permanent Mission.

Canada's Permanent Mission to the World Trade Organization, the United Nations and the Conference on Disarmament in Geneva

The Permanent Mission of Canada to the World Trade Organization, the United Nations and the Conference on Disarmament in Geneva is Canada's largest multilateral mission. We promote Canadian interests and work with other Member States to develop and uphold international norms and rules whether in terms of trade, health, labour environment, arms control, humanitarian law or human rights.

The Mission of Canada is the primary channel for diplomatic representation and communications between the Canadian government, the United Nations and its associated bodies in Geneva, the World Trade Organization and many other entities based in Geneva.

Ambassador Leslie E. Norton is Canada’s Ambassador & Permanent Representative of Canada to the United Nations and the Conference on Disarmament in Geneva.

With more than 180 accredited missions (including states/observers), over 20 UN programs, funds, and specialized agencies and over 3,000 accredited civil society organizations, Geneva is a dynamic environment influencing critical global socio-economic and political developments.

Reflecting our whole-of-government and whole-of-Canada orientation, the Mission is comprised of staff from several Canadian departments and agencies, as well as locally engaged personnel. Our Canada-based staff come from Global Affairs Canada, the Immigration, Refugees and Citizenship Canada, Agriculture and Agri-Food Canada, and the Department of Finance Canada. Beyond these, our partner departments also include Health Canada, the Labour Program of Employment and Social Development Canada, Environment and Climate Change Canada, Public Safety Canada, the Department of National Defense, Innovation, Science and Economic Development Canada , Natural Resources Canada, Transport Canada, the Canada Revenue Agency, the Canadian Food Inspection Agency and the Canadian Intellectual Property Office. Given our unique role in connecting with key international organizations including the UN and WTO, the Mission looks after the interests of Provinces and Territories.

The Mission also provides consular and passport support to the nearly 3,000 Canadians residing and working in Geneva.

Canada's Ambassadors to the UN

The Honourable Robert Rae, Ambassador and Permanent Representative of Canada to the United Nations in New York 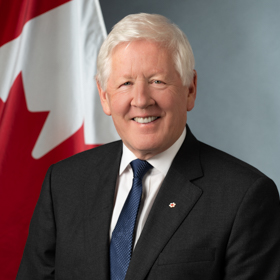 The former premier of Ontario and former interim leader of the Liberal Party of Canada, Mr. Rae was elected 11 times to federal and provincial parliaments between 1978 and 2013. He stepped down as a member of Parliament in 2013 to return to legal practice and, in particular, to work with Indigenous communities and continue his work in education, governance and human rights. His passion for social justice dates back to his early days in student politics and community service.

Before his appointment as permanent representative, Mr. Rae was senior counsel at Olthuis Kleer Townshend LLP. In addition to his legal practice, he taught at the University of Toronto in the School of Public Policy and Governance, in the Faculty of Law and at Massey College and Victoria University, and he was a fellow of the Forum of Federations, Massey College and the Raoul Wallenberg Centre for Human Rights. He has also worked as a mediator and arbitrator with ADR Chambers. A former partner at Goodmans LLP, Mr. Rae led the restructuring of the Canadian Red Cross and the Toronto Symphony Orchestra and chaired the board of the Royal Conservatory of Music. He is the author of 5 books and a number of government reports.

Mr. Rae is a privy councillor, a companion of the Order of Canada and a member of the Order of Ontario and has numerous awards and honorary degrees from institutions in Canada and around the world. He received his Honours Bachelor of Arts degree in Modern History from the University of Toronto and a Master of Philosophy degree as a Rhodes Scholar at Oxford University, and graduated from the University of Toronto Faculty of Law.

Along with music, reading and writing, he loves tennis, golf and fishing. He is married to Arlene Perly Rae. They have 3 daughters and 5 grandchildren. 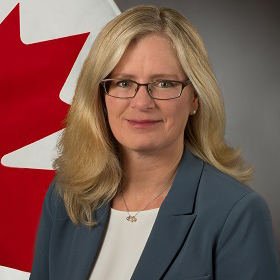 Leslie E. Norton (Diploma [Civilization and Literature], Aix-Marseille III University, 1985; BA Hons [English and French Literature], University of Western Ontario, 1988; MA [International Relations], Laval University, 1992) began her career in the Department of Foreign Affairs and International Trade (DFAIT) and then worked for many years at the Canadian International Development Agency (CIDA) in a range of positions in the Africa, Asia and Multilateral branches, including serving in Bangladesh and at the Permanent Mission of Canada in Geneva. At Headquarters, she served as Director of the International Humanitarian Assistance and Food Aid Unit at CIDA from 2006 to 2008 and as Director of the Humanitarian Affairs and Disaster Response Group at DFAIT from 2008 to 2009. She served as Director General of the International Humanitarian Assistance Bureau from 2009 to 2015 and as Director General of the Southern and Eastern Africa Bureau from 2015 to 2016. She served as Assistant Deputy Minister of the Sub-Saharan Africa Branch from 2016 to 2019 and was subsequently appointed Canada’s Ambassador and Permanent Representative to the United Nations and Conference on Disarmament in Geneva in August 2019.

Leslie E. Norton
Ambassador & Permanent Representative of Canada to the United Nations and the Conference on Disarmament in Geneva

Ambassador and Permanent Representative of Canada to the World Trade Organization 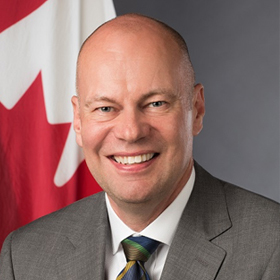 Stephen de Boer joined Global Affairs Canada in 2005 and has held various positions in the department, including in the Investment Trade Policy and North America Trade Policy Divisions. In 2006, he was named the Director of the Softwood Lumber Division. From 2008 to 2010, he served as the Director of the Oceans and Environmental Law Division and as Lead Counsel for Canada’s international climate change negotiations. In 2010, he joined Environment Canada as the Deputy Chief Negotiator for climate change and the Director General responsible for Canada’s international climate change negotiations and partnerships. Mr. de Boer returned to the department in 2013 as the Director General of the Trade Controls Bureau. In 2015, he was appointed Ambassador to Poland and in 2016, Ambassador to Belarus. Prior to joining the public service, he worked for the Government of Ontario.

On August 21, 2017, Mr. de Boer was appointed as Ambassador and Permanent Representative to the World Trade Organization in Geneva.

Permanent Mission to the United Nations in New York

Permanent Mission to the WTO, the UN and the CD in Geneva

Return to top
Report a problem or mistake on this page